Embedded systems companies tend to use processors from established firms like NXP Semiconductors or Texas Instruments, we’ve seen few systems-on-module based on processors from Amlogic, Rockchip, or Allwinner which are popular on this blog due to their value proposition. One of the reasons was/is software support, but this has improved over the years, and the other is the lack of wide temperature range parts plus potential concerns about long term supplies. I’m not aware of any industrial/extended temperature range part from Amlogic, but Allwinner provides A40i/A60i industrial temperature range processors, and Rockchip RK3399K supports an extended commercial temperature range between -20 to +85°C. Kontron selected the latter for their first-ever Rockchip powered system-on-module: the SMARC-fA3399 SMARC 2.1 module. SMARC-fA3399 SoM specifications: SoC – Rockchip RK3399K hexa-core processor with two Cortex A72 cores @ 1.8/2.0 GHz (wide temp vs commercial temp), four Cortex-A53 cores @ 1.4/1.6 GHz, Arm Mali-T860MP4 GPU System Memory – Up to 8GB LPDDR4 memory down Storage – […]

TQ Group, headquartered in Germany, has launched two NXP i.MX 8X Cortex-A35 modules with TQMa8Xx and TQMa8XxS SoMs, with the latter being SMARC 2.1 compliant, and both targeting various applications ranging from medical devices, HMIs, industrial controllers and industrial Internet of Things (IIoT) to gateways, building automation, transport, and robotics. The press release explains NXP will officially launch i.MX 8X CPUs on May 14, 2020. We first heard about i.MX 8X in 2016, before an official announcement in 2017, and we wrote about Toradex i.MX 8X SoM in 2018, plus 96Boards AI-ML SBC in 2019, so I naively believed the processor had been around for a couple of years, but the Toradex SoM product is still shown as an “early product announcement” [Update: the page has just been updated since it is now shipping as well],  and AI-ML board has just launched with 26 units available on Arrow website. Some samples have been around for companies part of “NXP Early […]

There are plenty of standards for systems-on-module that are supposed to allow interoperability between vendors. For example vendor 1 may create a Qseven SoM that works with vendor 2’s Qseven compliant carrier board which should accept any Qseven compatible module, although in practice, there are always some small differences that may cause problems. Many of those standards are managed by SGET (Standardization Groups for Embedded Technologies) including SMARC (“Smart Mobility ARChitecture”), Qseven, and Embedded NUC. A recent post on ADLINK Technology alerted us of the publication of SMARC 2.1 hardware specification (PDF) with the following changes: Incorporated Errata 1.1 Rev. 2 (2/9/2017) Updated signal tables with pin number, power domain, termination information… Added details for eDP[0:1]_HPD Added SERDES as alternative function for PCIeC and PCIeD Added MDIO Interface Updated power domains and power sequencing Added two extra GPIOs PCIe Clock Request signals for PCIeA and PCIeBat at previous locations Changed fill order for MIPI CSI (CSI1first, then CSI0) Added CSI […] 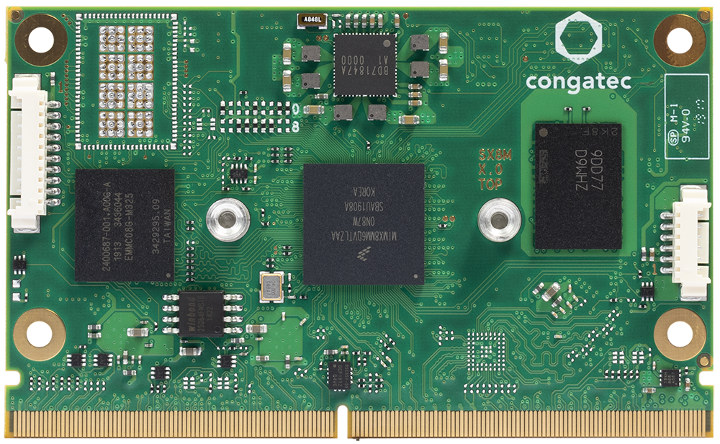 NXP i.MX 8M Mini is the first i.MX processor from the company to be manufactured using a 14nm process, which enabled a higher 2.0 GHz frequency for the Cortex-A53 cores.  While it was announced in 2018, the first systems-on-module were launched earlier this with products such as iWave System’ iW-RainboW-G34M-SM, TechNexion Axon Flex modules, F&S Elektronik Systems PicoCore-MX8MM, or CompuLab UCM-iMX8M-Mini among many others. So far, we had no covered any SMARC 2.0 compatible system-on-module based on the new NXP processor, but some companies had already launched such modules including Embedian and Avnet. Congatec has now joined them with the launch of conga-SMX8-Mini SMARC 2.0 system-on-module which builds on the company’s earlier conga-SMX8 i.MX 8 module. conga-SMX8-Mini SoM specifications: SoC (one or the other) NXP i.MX 8M Mini Quad with 4x Arm Cortex-A53 @ 1.8 GHz, 1x Arm Cortex-M4 @ 400MHz, GC NanoUltra 3D GPU, GC328 2D Graphics NXP i.MX 8M Mini Dual with 2x Arm Cortex-A53 @ 1.8 GHz, […] 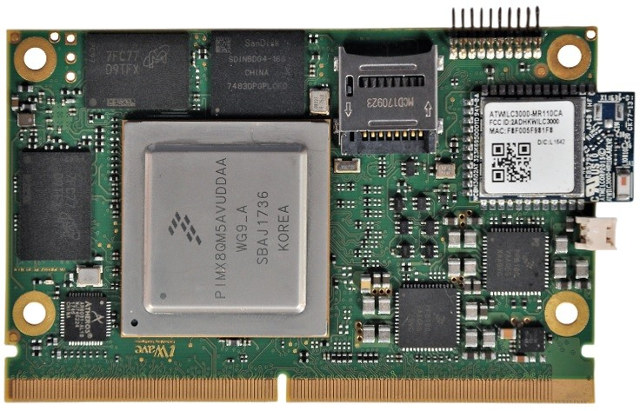