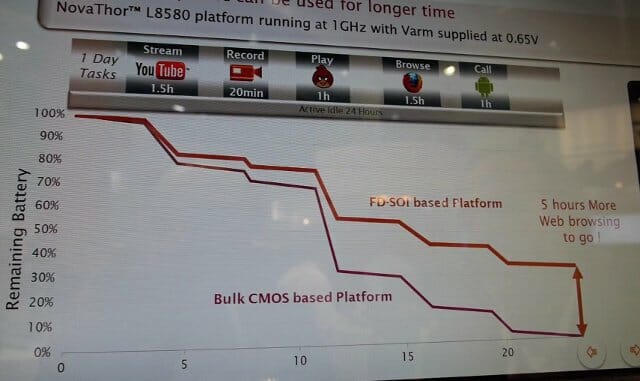 ST Ericsson already showcased NovaThor L8580 Cortex A9 processor @ 2.8 GHz at CES 2013. The processor features a technology called eQuad, and as I previously noticed there’s no mention of the number of cores at all on the website and many websites reported the processor featured 4 cores. The processor actually features 2 Cortex A9 core, but thanks to FD-SOI technology they are able to do the equivalent of a Quad Core big.LITTLE processor (i.e. 2x Cortex A15 + 2x Cortex A7) electrically. Since this is just done electrically, you can use the same software as before and will consume much less power, whereas big.LITTLE requires a lot of kernel work. A Cortex A9 will obviously be less powerful than a Cortex A15, but since they are able to boost the frequency up to 3GHz (probably limited to 2.5Ghz in actual product) this can compensate the lower performance, and […] 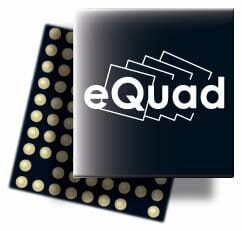 We’ve first heard about ST Ericsson NovaThor L8580 in July 2012, and the company demonstrated their new processor at CES 2013. This SoC features 4 (or is it 2?) Cortex A9 cores, and a PowerVR SGX544 GPU, but the real advantage of this processor is the new process technology called FD-SOI (Fully Depleted Silicon On Insulator) which, combined with some other power and performance optimization techniques,  allows some fun stuffs such as: 2.8 GHz dual core operation 1 GHz operation at 0.63V instead of 1.1V when using bulk CMOS technology. You can see those 2 use cases in the video demo. In the first demo, a phone prototype based on L8580 @ 2.8Ghz is clearly faster than the Samsung Galaxy S3 based on Exynos 4412, and the second demo shows power measurement of the prototype when ran at 1GHz. Other key features of L8580: Low-power eQuad processor clocked at up […]

ST Ericsson is working on a new application processor manufactured with 28 nm FD-SOI technology by ST Microelectronics. The new processor NovaThor L8580 features 2 Cortex A9 core that can be clocked at 2.3 GHz and is aimed at smartphones and tablets. The company also improved power efficiency, as L8580 consumes 35% less energy than L8540 (28 nm) when clocked at 1.85 GHz (maximum frequency for L8540). If you need even lower power consumption, L8580 can be clocked at 1.0 GHz with an input voltage of 0.6 V, whereas current competitors’ processors require at least 0.9V to operate at 1GHz. ST-Ericsson estimates that Novathor L8580 will be able to offer an extra day battery life compared to L8540 on a typical smartphone, which correspond to about 4h and 2h30 extra for web browsing and HD video playback respectively. NovaThor L8580 SoC will embed a PowerVR SGX544 GPU clocked at 600 […]

Vincent Guittot, ST Ericsson and Linaro, compares power saving techniques for multicore ARM plaforms at Embedded Linux Conference 2012. Abstract: CPU hotplug is used on ARM platform as a power management feature for aggressive low power use cases. It has not been initially designed for that purpose, which implies some constraints on its use but the same power consumption level can’t be reached with the scheduler load balance and/or additional features like cpuset up to now. This presentation will discuss how CPU hotplug matches the low power use case requirements and how we can get closer to this behavior with sched_mc. Then we will also show what prevents the scheduler to reach the same power consumption level as CPU hotplug and how we can solve some of these issues. This presentation is aimed at anybody who is interested to understand why ARM platforms still use CPU hotplug and what should […] 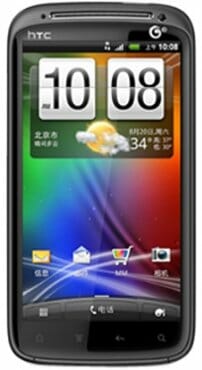 ST Ericsson is showcasing HTC and Via Mobile Android smartphones based on ST Ericsson Nova U8500 dual-core Cortex A9 processor at CES 2012. The two phones are the HTC Sensation (Z710t) and Via Mobile Smartphone (I could not  find any names) targeted at the Chinese market, although they plan to sell them in Europe and US later. The Via Mobile phone features a 4.3″ capacitive touchscreen, HSPA+ (14.4Mbps) and a 5MP rear camera. The smartphones were apparently running gingerbread, but they will also release an Android ICS version soon, as the latest Android release is already running on their hardware reference platform. Performance wise, I’ve seen an Antutu Benchmark that gives HTC Sensation Z710t a score of 4729 that’s roughtly equivalent to LG Optimus 2X (Score: 4729) based on Nvidia Tegra 2. The price of the phones were not disclosed, but the ST Ericsson HTC Sensation is already sold in […]

Andrea Gallo, Chief Linux Architect in the Smartphone and Tablet Solution organization in ST-Ericsson and part of the Linaro Technical Steering Committee, explains how a common Linux ARM kernel benefits ST Ericsson Snowball development platform. Abstract: Last March, the ARM Linux community got shaken by the complaints by Linus Torvalds for its lack of proper structure and organization. This is totally true and mainly due to the large number of different SoC vendors, each one integrating the ARM IP’s in a slightly different variant. Linaro immediately accepted the challenge to drive the kernel alignment of the ARM community and most ARM Linux experts got together and agreed on the way forward as early as May 2011 at the Developers’ summit in Budapest. ST-Ericsson is a founding member of Linaro and some key ST-Ericsson engineers are assigned to Linaro and specifically to this kernel alignment working force. In the speech, Andrea […] 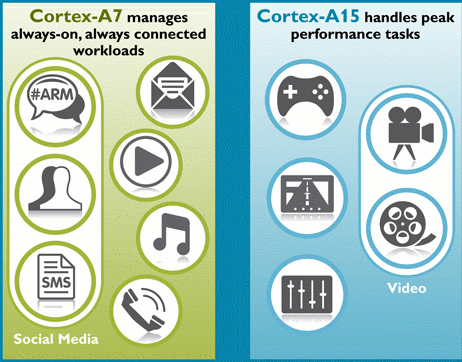