ARM unveiled the Cortex A7, a new core with higher performance than the Cortex A8 (1.5x) and with 5 times less power consumption. It will be used in conjunction with Cortex-A15 Core and allows big.LITTLE processing where the Cortex A7 (companion core) takes care of the low performance, low power tasks (social network, email, SMS, phone calls) and the Cortex A15 kicks in for high performance tasks such as video processing and gaming.

Here’s an excerpt of the Cortex A7 / big.LITTLE processing press release:

Big.LITTLE processing, enabled by Cortex-A7, achieves this by pairing the best of the high-performance Cortex-A15 MPCore and ultra-efficient Cortex-A7 processors. Big.LITTLE processing allows devices to seamlessly select the right processor for the right task, based on performance requirements. Importantly, this dynamic selection is transparent to the application software or middleware running on the processors

You can read the full press release on ARM website.

ARM says Cortex A7 processor is fully compatible with other Cortex-A series processor and incorporates all of the features of the high-performance Cortex-A15 processor including virtualization, large Physical Address Extensions (LPAE) NEON advanced SIMD, and AMBA 4 ACE coherency.

A single Kingfisher processor can deliver 5x energy-efficiency, 50% greater performance and is one fifth the size of the ARM Cortex-A8 processor, which powers many of today’s most popular smartphones.

The Cortex A7 can be used:

As a standalone processor, the Cortex-A7 will enable entry level smartphones at below 100 USD price point in the 2013-2014 timeframe that are equivalent to a 500 USD high-end smarphone in 2010.

I’m also convinced we should also see very low cost development board (maybe around 50 USD) using the technology with slightly better performance than the Beagleboard. 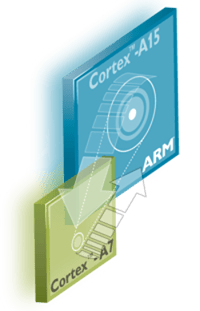 ARM pushed the concept of companion core I first discovered with the NVidia Tegra 3 further with the Cortex A7. Here’s what the company says about the big.LITTLE processing technology:

big.LITTLE processing addresses one of today’s industry challenges: how to create a System on Chip (SoC) that provides both high performance as well as extreme power efficiency to extend battery life. big.LITTLE connects the performance of the ARM Cortex-A15 MPCore™ processor with the energy efficiency of the Cortex-A7 processor, and enables the same application software to be seamlessly switched between them. By selecting to optimum processor for each task big.LITTLE can extend battery life by up to 70%.

Since Cortex A7 and Cortex A15 use the same instruction set (ARMv7a), software developers won’t have to care on which core their software will run to take advantage of lower power consumption and longer battery life, although it will  still possible to switch between cores with a software switcher.

ARM has done a big.LITTLE processing demo using Android Browser in Gingerbread using a big.LITTLE aware Power Management Driver. They will provide open source firmware for “state migration” between Cortex A7 and Cortex A15, but I could not find further info on this yet.

There is an obvious advantage in mobile devices like smartphone and tablets, but ARM expects this technology to also be used in datacenters where they have pressure to keep electricity bills low. The Cortex A7 would be active during periods of low traffic (e.g. night time, week-end) and during burst of traffic the Cortex A15 would take care of the extra load.

You can read big.LITTLE Processing with the Cortex-A15 and Cortex-A7 Processors white paper for further details on the technology.