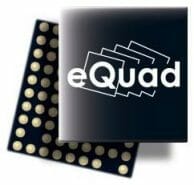 We’ve first heard about ST Ericsson NovaThor L8580 in July 2012, and the company demonstrated their new processor at CES 2013. This SoC features 4 (or is it 2?) Cortex A9 cores, and a PowerVR SGX544 GPU, but the real advantage of this processor is the new process technology called FD-SOI (Fully Depleted Silicon On Insulator) which, combined with some other power and performance optimization techniques,  allows some fun stuffs such as:

You can see those 2 use cases in the video demo. In the first demo, a phone prototype based on L8580 @ 2.8Ghz is clearly faster than the Samsung Galaxy S3 based on Exynos 4412, and the second demo shows power measurement of the prototype when ran at 1GHz.

check the date, I think you meant july 2012 and it is a dual core I believe.

Speaking of Intel chipzilla will kill them all when it releases some of its serious x86 low power stuff. A9s even at 2.5 GHz are just too weak even for A15s.

@EARL CAMERON Right… I changed the date :). Last July, they announced it was a dual core, but with the recent announcement it’s very confusing as they don’t explicitly give the number of cores. But they call the cpu part “eQuad” which let us believe it’s a quad core, and most sites report it’s a quad core. @misko For cortex A9, PowerVR GPU series 5xt are usually more powerful than Mali or Vivante, so I guess that’s one reason. With A15 cores they could also use one of the Mali-T6xx, so I don’t know why Samsung chose s PowerVR GPU… Read more »

Samsung probably used Power VR for the Octa since Power VR is a lot more power efficient than Mali. Mali cores just use too much power to be used when all Octa cores are running.

eQuad is actually a dual core processor, but they can do something similar to “big.LITTLE” IKS electrically, as each core can run either with full performance, or in low power mode, so they called it eQuad.