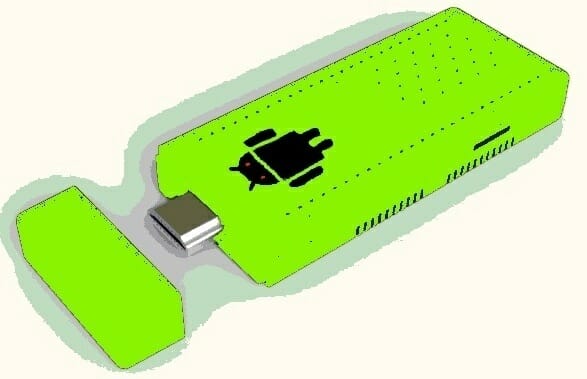 Lately, there seems to have been a fair amount of interest for a Rockchip RK3066 mini PC (aka UG802) running Android 4.0, and the first mini PC to feature a dual core processor. I’m often reading people complaining about the lack of RAM on those devices, and some others would rather run most things from flash than an SD card for performance reason. But you might be able to get a more powerful mini PC soon, as deadhp1, a reader of this blog would left lots of feedback about Ug802, have been talking with manufacturer to design an HDMI TV stick based on UG802 platform, but with 2 GB RAM and 16 GB Flash, and the processor would be clocked at 1.6GHz instead of 1.2 GHz. The device is called “Dual Droid TV Stick” with the slogan: “Two brains are better than one”. The specifications would be as follows: OS […]

If you follow this blog (and others), you should already know there’s a new dual core Cortex A9 Android mini PC in town based on Rockchip RK3066. Deadhp1, a reader of this blog, bought one and left a short review about the device, including his first impressions and an Antutu benchmark (6801). He also noticed that the device is not rooted by default, and followed the instructions for Window N90 II tablet (source: Slatedroid) to root the device: Download Moborobo Download a modified version of SuperOneClick – Short Fuse (Originally found in Slatedroid link above). Install Moborobo and start the program Make sure USB Debugging is enabled on your mini PC(Settings –> Developer Options) Connect your UG802 mini PC (using the microUSB port) to your PC Wait for Moborobo to detect the device Extract the contents of SuperOneClick Run SuperOneClick.exe Click on Root It will says the device is already […]

A little while ago, I bought my CX-01 mini PC for ~$42 thanks to a group buy organized by togetho.ru. This website does not sell directly, but negotiates with online merchants such as Pandawill and sellers on Aliexpress so that interested buyers can buy a particular product at a discount with a Coupon. This time, togetho.ru is organizing a group buy for the Rockchip RK3066 dual core Cortex A9 mini PC for $78.99 (vs $89 normal price) on HK Good Aliexpress website (Product name: UG802). Here’s what you have to do to participate: Go to UG802 product page on Aliexpress Select free Hongkong Post Air Mail shipping. You are also supposed to select the “Black” version, but I can’t see this option in the site. If HK post is not available, select another method, and leave a comment (See below). Click “Buy Now” and “Confirm”. In the message box: Write […]