Many Linux developers or admins use vi or vim in Linux to edit source or/and configuration files and some may want to use it in the go in their smartphone or tablets. Some hacks are available to install vim on Android via ADB on a rooted device, but now, it has all become nice and easy, as a touch enabled version of vim called VimTouch is also available on Android. 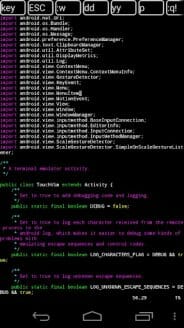 This vim editor for Android includes the following features:

You would think it is rather cumbersome to use vi/vim on a mobile device, but reviews are generally good, so I may give it a try.

Vim Touch can be downloaded free of charge on Google Play and can be installed on any Android devices running Android 2.3.7 and greater.

momodalo (Vim Touch developer) also made the source code available on Google code you can clone the source with git: