A80 OptimusBoard is a development board featuring the latest AllWinner A80 SoC with 8 ARM Cortex A15/A7 cores in big.LITTLE configuration, and a PowerVR GC6230 GPU. Availability was announced about 2 weeks ago for $345, but partially thanks to reader comments on CNX Software, Merrii Technology decided to lower the price to $169 (and $50+ for shipping) to stay competitive against similar boards such as Hardkernel ODROID-XU3. I’ve now received a sample for evaluation. I won’t go again through the specs, but today I’ll take a few pictures of the board, and provide benchmark results to compare them to the ones I got with Rockchip RK3288. Normally, I would also play with the SDK provided with the board, but sadly (and amazingly), there’s currently no such SDK for A80 OptimusBoard, except a leaked Linux SDK which failed to build with recent tools and operating systems.

I’ve received the board via DHL from WITS Technology in the following package. 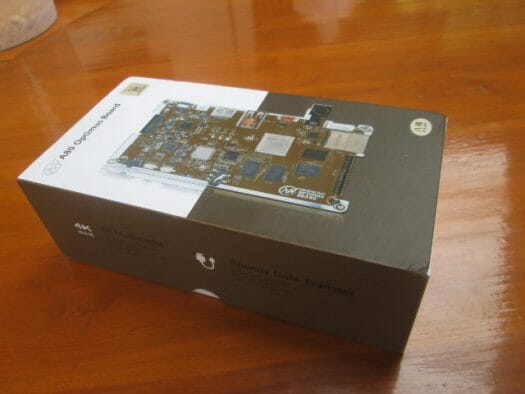 Inside the package, we’ve got the board itself in a transparent acrylic “enclosure”, a 5V/3A power supply, and a USB to serial cable.

I’ve also taken several pictures of the board. The top view shows AllWinner A80 SoC with 4 SKHynix chips for 2GB RAM, an AP6330 Wi-Fi module, and AXP809 PMIC, as well as various header for camera, serial, GPIOs (32 pins), battery, and JTAG. There’s also an IR receiver, and two small buttons for reset and power\ on this side of the board.

One thing that surprised me is that they did not include a heatsink with the board. Normally these kind of board comes with heatsinks and even maybe a fan small to let developers push the performance.

On the back of the board, there’s mostly the 16 GB Samsung eMMC flash, and a micro SD slot.

I’ve connected an HDMI cable between the board and my TV, my air mouse RF dongle, an Ethernet cable, and the power supply to start the board. Boot time takes about 25 seconds.

I’ve been told the benchmarks may not be as high as for AllWinner A80 tablets. But let’s try anyway. Luckily, Google Play is installed with the firmware, but although I can login and search for apps, clicking on install did nothing. No problem, as I can install them by selecting “No Carrier AllWinner UltraOcta A80 OptimusBoard” on Google Play website.

But before running benchmarks, let’s get some details about AllWinner A80 SoC and the board with CPU-Z.

Since only some Cortex A7 cores (between 480 MHz and 1.20 GHz), CPU-Z appears to ignore Cortex A15 cores, and wrongly reports eight Cortex A7 cores. The codename of the board is “kylin_optimus”, which may be something useful to know when looking for information. It’s running Android 4.4.2 on top of Linux kernel 3.4.39, and everything have been built in early July. Resolution is 1920×1016, only 1205MB RAM is reported, most probably because some is reserved for the GPU, and some other hardware buffers. There’s 12.82 GB of internal storage.

The first benchmark I ran is Antutu 5, which they released yesterday.

It gets 33,921 which seems a little low, considering Amlogic S802 (Probox2 EX) got 37,000 with Antutu 5 (Beta), but as mentioned above they have not optimized the current firmware and hardware for performance. I haven’t run Antutu 5 on Rockchip RK3288 devices yet, so I can’t do a direct comparison yet. The firmware is also dated July 3,2014, so some more optimization may have been performed on the firmware since then. Yet no new firmware has been released.

Next… Quadrant benchmark could not run at all, and all I got was a black screen, just like with UyeSee G1H TV Box.

Vellamo worked, but I had to try twice to complete the benchmark. 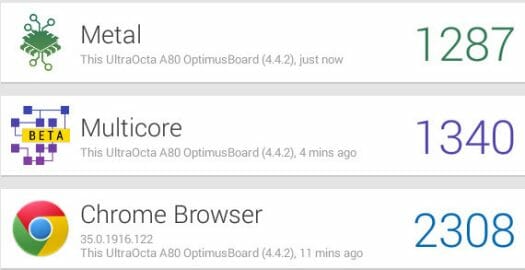 During the tests, I also connected the serial console. Here’s what I got during the multicore test:

AllWinner A80 cores are booted in sequences. The Cortex A7 cores with 500ms interval, and the first two Cortex A15 are started first in 1 second intervals, and then 2 seconds interval. These delays may explain the lower performance of AllWinner A80 compared to Rockchip RK3288, and are probably done to optimize power consumption, rather than performance. You’ll also notice that when all 8 cores are running the Cortex A15 frequency is limited to 1.6 GHz, and after CPU7 is shutdown, it is re-adjusted to 1.8 GHz. Checking “/sys/devices/system/cpu/cpu1/cpufreq/scaling_governor” show it’s set to “interactive”. so it would probably be possible to get a higher performance, with the CPU governor set to “performance”. I’m not sure how to change the behaviour since “cpupower” does not seem to be available (by default) in Android, and “cpufreq” directory is not available with shutdown cores. Maybe I should study about this, and write my finding in a separate post. Tips are welcome.

I’ve also noticed that running “cat /proc/cpuinfo” will only show the cores that are not shutdown, so during idle time you may just see one core.

But yet again, the results are somewhat disappointing, as A80 OptimusBoard got 5,841 points against 7,278 points for Rockchip RK3288, but the main culprits are the Physics score and test which for some reasons are much lower on AllWinner A80. The other scores are similar to Rockchip RK3288.

Finally some Linux benchmarks results. There’s still no Linux distribution available for A80 Optimius Board, but Linuxium ran some tests from the Phoronix test suite in a Linux chroot in Android comparing it to ODROID-U3 (Samsung Exynos 4412), MINIX NEO X8 (Amlogic S802), and Radxa Rock (Rockchip RK3188). These are all ARM Cortex A9 quad core processor, and the AllWinner A80 development board easily outperform these in most test. 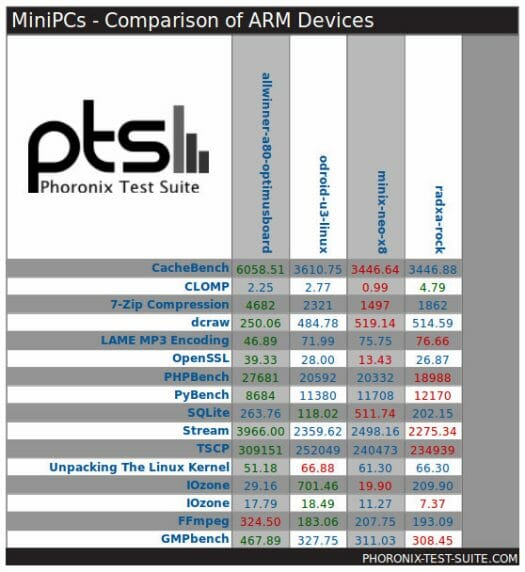 All these benchmark results should be taken with grain of salt, as the firmware is rather old, and I’d expect some performance improvement with newer firmware, and CPU governor set to performance.

Very interesting article, hope to read more soon about this board

The Allwinner kernel does not seem to differentiate between Cortex-A7 and Cortex-A15.
All CPUs are listed as the same in /proc/cpuinfo. Hence the puzzling output by CPU-Z.

Nice. Waiting for a full review 😀

It is really in need of optimizing the software.

@werewolfc
I don’t do the same type of reviews for development board as for Android TV boxes, simply because they are more versatile, and are supposed to be used for various applications, and operating systems. So normally, I play with the SDK. So now I’m patiently waiting for it, and I’ll write about this.

@davidlt
Thanks First I was confused because cpufreq is only shown with running cores,and I thought I would have to run this for all cores. I’ll try again soon.

Jean Luc is it possible to see a versus test suite A80 Vs Exynos5422 anytime soon?

i am curious about several things as raw processing soc power and smp processing power.

@Jean-Luc Aufranc (CNXSoft)
Already beated by Exynos 5430 (20nm), ont top of AnTuTu with 50K. Is it possible for you, please, to test phoronix test suite or hardinfo with RK3288 on a true GNU/LInux or another available bench for Android, to confirm it is at least good in other benchmarks ? Could be interesting to compare A80 and RK3288 in other benchmark ?

As for Phoronix, I’m not sure I’ll have time, but I could test in a chroot in Android. That’s how Linuxium does it.

I plan on adding a RK3288 result to the comparison table once I get a device. Hint … any company want to offer me a RK3288?

New firmware for A80 Optimusboard. I don’t have details except NTFS write/read speed must have been improved. I only got 3MB/s write speed before. I have not tested the new firmware. yet.