This blog is hosted on a Linode VPS with 512 MB RAM and running Ubuntu 11.10. Up until today, Apache2 was the web server, and it worked fine except sometimes, it reached connection and memory limits, and the blog would go offline for a short period of time, especially right after a new blog post. So this week-end, I decided to switch to nginx (pronounced engine-x) web server which is said to use less memory than Apache2. Let me know if something suddenly stopped working…

nginx is a relatively recent web server, and the documentation on the web seems to become outdated pretty fast, so I’ve decided to document what I’ve done.

The first thing I would recommend is to try it in your own local server first,  and make sure most things are working including plugins.

Testing your WordPress blog with nginx in a local server

I run Ubuntu 12.04 in VirtualBox, and since we are going to run a server, I’ve set the network connection in VirtualBox to “Bridged Adapter” and not “NAT” in order to make things easier.

The very first thing you want to do is to backup your WordPress site either manually, or thru tools such as BackWPup.

Install ngnix, php and mysql in the server:

Create a nginx configuration file for your wordpress blog in /etc/nginx/sites-available/wordpress:

Note that I used port 8080 instead of 80, because I eventually intended to test this in the VPS at the same time as the main apache2 server was still running, but finally decided against it… Using port 80 would be slightly simpler.

As mentioned in the note in the config file above, edit /etc/php5/fpm/php.ini to enable the line:

Import the database previously backed up:

If you want to access the blog from another device on the LAN, you need to make sure port 8080 is open:

Check everything is working as expected. If it does, you’re now ready to update your server.

Migrating from nginx to apache2 in the VPS

There are fewer steps for this part as most of required components are already installed and configured, if you are already running a WordPress blog with Apache2.

Create a nginx configuration file for your wordpress blog in /etc/nginx/sites-available/wordpress. Assuming you used the same paths in your local server and your VPS, It’s the same file as in the section above, expect you need to change two lines:

Enable your wordpress blog and delete the default server config:

Edit /etc/php5/fpm/php.ini with the line:

You’ll also need to edit /etc/php5/fpm/pool.d/www.conf and change the line:

That’s all. Now it’s time to turn off Apache2 and start nginx:

Go to your blog (e.g. http://www.domain.com) and it should work (mostly) fine.

I had to change a couple of things.

Once you’re happy with the changes, make sure Apache won’t be start at next boot:

ngnix and php5-fpm have already been configured to start automatically at boot time during installation.

The blog appears to work fine, but I still have a few things to work out such as Awstats support and minify.

[Update: July 5, 2012. I’ve been running nginx for a little over 10 days, everything seems to be working fine, and I/O rate has decreased, and swapping is basically a thing of the past (The little spike during nginx usage was due to a virus scan)

[Update 2: After I updated my server to Ubuntu 12.04, CPU usage and I/O rate went slightly up, so I decided to give a try at apc. It’s actually very easy to setup:

And the results are pretty impressive with both CPU usage and Disk IO rates taking a plunge. 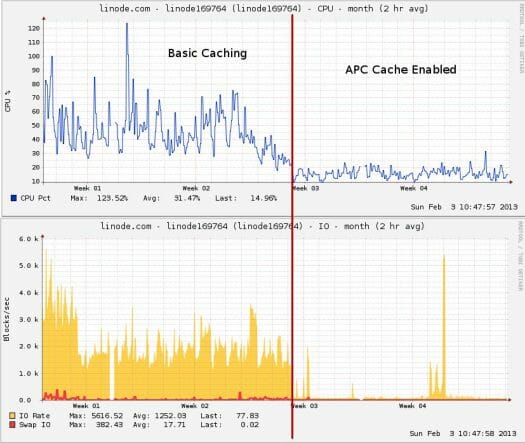 Strangely I did not see any improvements in Google Analytics Page Speed charts, but Googlebot seems to be happy about it, as it now takes a bit over 400 ms to download a page on average instead of around 900 ms before APC was enabled.