Google announced that the 1st Google TV 2.0 device is now available for pre-order in the US and in UK for $199.99. Sony NSZ-GS7 is a set-top box based on Marvell GTV reference design, which comes with a dual-sided “magic” Bluetooth remote (NSG-MR5U). The device was first seen at CES 2012. 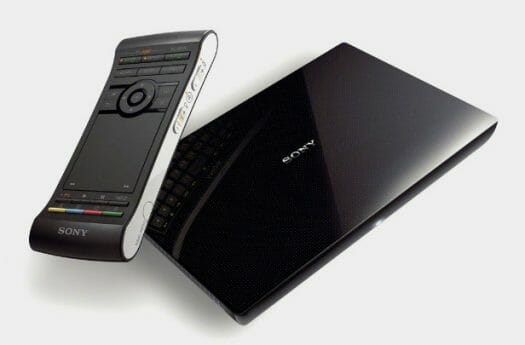 Here are the key specifications of this media player:

The device can also support 3D videos and pictures (MPO). External storage is supported via USB (Flash memory / HDD), but only supports FAT32 and NTFS file systems, and NTFS is read-only. I’m not really sure why they introduced this limitation. They must have heard about ntfs-3g, haven’t they ?

But the most interesting part of this device is that is runs the latest version of Google TV and comes pre-loaded with an optimized Youtube application, Google Chrome for Android and Google Play.

To control the set-top box, you can either use the provided Bluetooth remote control or download Google TV Remote app onto your Android smartphone / tablet or iPhone.

Although the device is only available for pre-order in the US and UK for now, Sony plans to bring their GTV player to  Australia, Brazil, Canada, France, Germany, Mexico and Netherlands in 2012.

You can find more information on Sony NSZ-GS7 and Google TV pages.

The underlying hardware sounds quite good but I wonder how the software will hold up. Hopefully they have polished the GTV OS a bit more.

Also that’s a lot of money to pay for a media device which has no DTS audio support, you can get cheaper players for half the price with DTS supported though I suppose you have to consider in the Sony factor. The LG 2nd gen GTV television running on their own L9 chipset apparently supports DTS.
http://www.youtube.com/watch?v=93TBoNFaBhk