Crystalfontz America, a supplier of LCD and OLED display modules used in embedded systems, has launched a Kickstarter campaign to fund manufacturing and lower the cost of a system-on-module powered by Freescale i.MX28 featuring a small 128×32 OLED display, and lots of GPIOs. 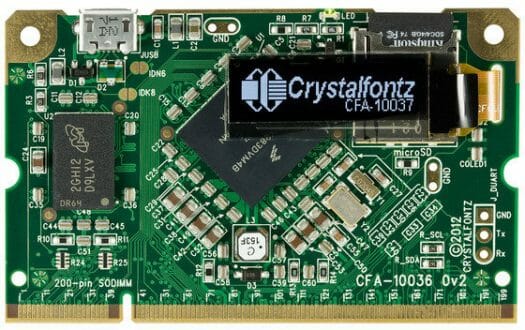 The company will also provide CFA-10037, a baseboard for CFA-10036 module, in order to ease prototyping.

CFA-10037 board gives access to all the port pins of the CFA-10036 / Freescale i.MX28, and features Ethernet PHY and USB A connector, as well as a large prototype area which also includes a set of holes that line up with shields designed for an Arduino Uno R3. JTAG signals are also exposed for hardware-level debugging. Terminal access can be achieved via the microUSB port or a TTL to USB board connected to the Debug UART pins of CFA-10036 or CFA-10037.

Freescale usually releases the full source code and provides great documentation for their processors. However I’ve heard several developers complain how the lack of mainstream support, and you always end-up with somewhat outdated kernels. This is exactly the case for i.MX28, as Freescale i.MX28 Linux port is still based on Linux kernel 2.6.x. This is why Crystalfontz has decided to ask Free-Electrons to create a device tree for the CFA-10036 under the current mainline kernel version 3.7.

The platform will be mostly open as they will release the full schematic (PDF, PADS) and layout (gerbers, PADs) of the CFA-10037 baseboard, and release the schematic in PDF format for CFA-10036 as well as documentation of all the pin functions. It’s not fully open source hardware a la Olimex, but should be good enough for most projects. Buildroot and the kernel are available on Crystalfontx GitHub account.

You can watch the Kickstarter video for an introduction to the board, and see what people may do with it.

If you are interested in the project, you can pledge between $45 to $210 to get different combinations of module + baseboards. There are mainly four choices:

The KickStarter campaign was not successful, but the boards are now available: http://www.crystalfontz.com/products/index-linux-SOM.html