If you have a Raspberry Pi, most likely it will have a green PCB since that’s the way they are manufactured it. The good news is that the Raspberry Pi is be available in its natural color Red very soon, however it will only be officially sold in mainland China, Hong Kong, Macau and Taiwan. 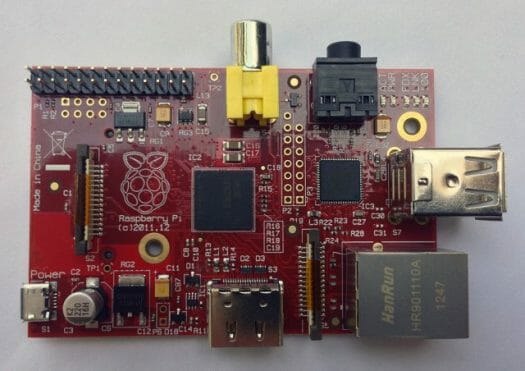 The reason for the geographical limitation is because Farnell and RS components have a worldwide co-exclusive license to sell the Raspberry Pi, and the selected Chinese manufacturer, Egoman Technology Corp , won’t be allowed to sell out of China. However, it will be hard to prevent third parties in China from buying the product, and selling it via Ebay or Aliexpress. The other reason for the differentiation is that the Red Raspberry Pi won’t be CE/FCC certified, even though, at the beginning, at least it will basically have the same components of the Green Raspberry Pi sold by RS and Farnell. In theory, it makes it illegal to sell it in Europe, North America, and probably some other countries.

Egoman Technology sells the Red Raspberry Pi Model B for 278 RMB (44.61 USD) on Taobao, but it will ship after Chinese new year.  This is quite close to the Cubieboard price (328 RMB) on the same site, so it’s not really that good of a deal. Having said that, the Raspberry Pi foundation is confident the retail price will eventually come down, as Egoman Technology is free to change components as needed to make it more cost effective, although features will remain the same.

and in Aliexpress too: http://www.aliexpress.com/wholesale?SearchText=raspberry+pi+red&catId=&initiative_id=