TCL and Tencent have jointly launched the iCE SCREEN, a “large screen mobile entertainment smart cloud product” featuring a 26″ screen with 1366×768 resolution. The companies expect this new type of smart TV to be used as  large portable screen, a video player, a music and photo album and an high-definition video communications device. 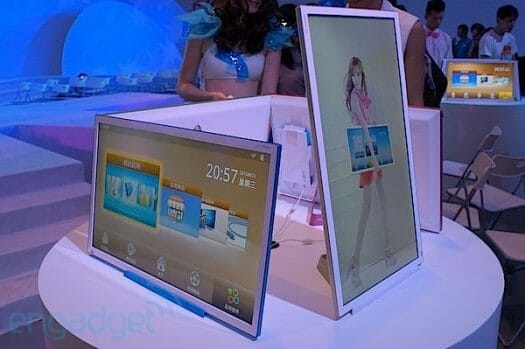 You would have thought a device with such a name to use an operating system such as Android “iCE SCREEN” sandwich (sorry I had to),  but Engadget Chinese reports it  to feature a customized version of Android 2.2, and in the press release, the companies referred to it as “independent operating system” that enables internet access to all sort of cloud based applications such as video playback, audio streaming and gaming.

Tencent will bring their QQ services to the display with apps such as QQ Video, QQ Album, QQ Music, QQ Messenger and QQ Game. iCE SCREEN can be used horizontally or vertically thanks to a rotary hanger, which might make it suitable to digital signage applications as well.

Engadget reports that this mobile display is powered by a dual-core Cortex A9 processor @ 1GHz with a Mali 400 GPU, 4GB of RAM,  SD card slot (up to 32GB), HDMI input, Wi-Fi, 2 USB ports and a 3.5mm jack. This display comes with an infrared remote, but a separate app is available for Android 2.2 and greater devices to control the display. There is no battery nor touch screen (so it’s not a tablet) and there’s no tuner (so it’s not a TV). The display weights 4 Kg which probably means it’s mainly “mobile” within the house, especially since you’d have to bring the power supply with you.

This mobile android display (should I call it a MAD?) will be available in China for 1,999 CNY (about 315 USD) in September.