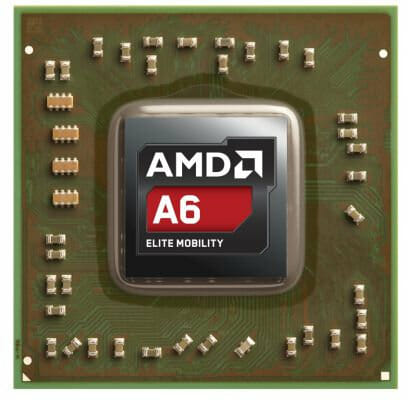 Here are the three new families of processors from lower to higher performance:

I’ll mainly focus on Elite Mobitity APU for tablets and netbook here, but if you want more information about Kabini and Richland, you can check out Liliputing article.

These APUs combine “Jaguar” x86 CPU cores with Graphics Core Next AMD Radeon HD 8000 Series graphics. AMD claims up to 172 percent more CPU performance per watt and up to 212 percent better graphics performance per watt than its predecessor (AMD C-70 APU (9W) vs AMD A4-1200 APU (4W)), as well as up to 12 hours of resting battery life. The company also tested a system based on A6-1450, and found 45 percent longer battery life, and close to five times more GPU performance than a system based on Intel Core i3-3217U (Acer Iconia W700-6607), both systems running Windows 8.

The company mentioned Windows 8 a few times in the press release, but never once Android, so I suppose those may be reserved to Windows 8 / Blue tablets and netbooks, and we most probably won’t see any AMD based Android tablets anytime soon. There was no mention of Linux either.

Brad Linder, Liliputing, explains AMD expects tablets and notebook to be cheaper than equivalent Intel device, but products which similar specs such as ASUS VivoBook X202E

are already available for $400, over $100 cheaper than Acer Aspire V5-122 mentioned above, so AMD claim on price may not be valid, at least for now.

You may be able to find more information on AMD Mobility page.