Gustavo Brancante is working on a very interesting project that let you control a prosthetic arm with your muscle movement using open source technology with InMoov Hand (which can be 3D printed), Arduino Uno R3, and Olimex Electrocardiography electromiography shield (SHIELD-EKG-EMG). This is called a Myo-Electric Prosthesis. 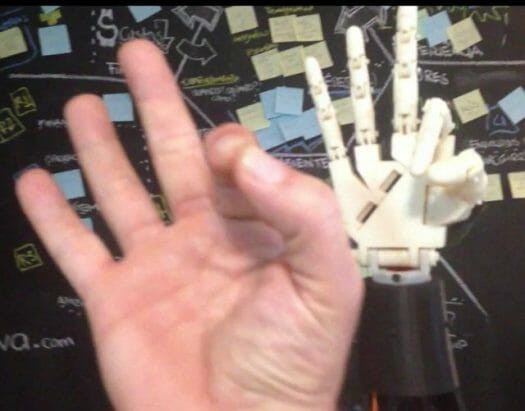 Gabriel wrote a tutorial to use his “open arm” which I’ll summarize here.

On the hardware front, you’ll also need a UDP compatible Wifi Shield configured as a UDP server with a fixed IP in the same LAN as the smartphone, and 57600 bps.

TouchOSC (for smartphone and Workstation) is used with the following layout for calibration and feature selection.

Finally load the program below to your Arduino board:

Once everything is connected together, you should be able to do that:

The demo looks impressive, but this is still work in progress, and next step will be to use a four channel EMG instead of the single channel Olimex EMG shield to be able to detect more advanced movements.

@fake
I sincerely doubt it’s fake. It’s neat, but there’s nothing “magic” about it. You can see the whole setup in the video, and somewhat detailed instructions are provided.

Not fake but useless. An amputee has no muscles to “connect to”.
And an arduino with that shield is not capable to connect to nerves. And he would need surgery to do it.

@zibri
I’m pretty sure there are commercial products like this in development. Amputees have still the nerves that supplied the muscles, and I *think* the idea is to take signals from these with the EMG.

@Jean-Luc Aufranc (CNXSoft)
HE FORGETS HIS LINES NEAR THE END AND HAS TO FUDGE IT. has to curl an extra finger because the robot hand does so before him.

@fake
Still not buying the fake argument:)
if you look at his program it only recognizes 6 patterns, so it’s possible the 2 fingers and 3 fingers patterns looks the same.

I think this products is at POC (Prove Of Concept) fase. But has value as a project to get investment from some industry player. About amputees have or not the nerves to connect sensors: they do have, but depends the type of amputation and the motricity remaining. One alternative to that is the neural interface. Good job Innova! I want to hear more about that in the near future.