Hewlett Packard has announced an all-in-one desktop PC in Beijing featuring a 21.5″ touch screen that ships with Android 4.2.2 instead of the usual (for dekstop PCs) Windows 8 operating system. It’s a concept we’ve seen before with devices such as Frontier FT103, but HP Slate 21 AIO is much more powerful with Nvidia Tegra 4 quad core cortex A15 against the TI OMAP4 used in the Frontier PC. 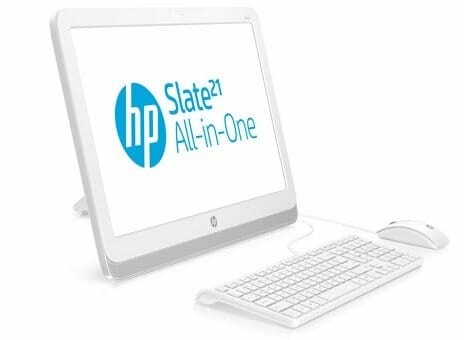 . [Updated specs with link from hp below]. There’s also an adjustable (15 to 70 degrees) kickstand at the back of the screen.

There’s no word on the battery, if any, but it’s likely to be only portable within the house based on the screen size, and heavy weight you’d get from such large device. As a reference, Frontier FT103 has the same screen size, and weights 5 kg.

It’s not the first time the blogosphere has heard about the device, as it had been benchmarked in April, but a passable score at the time. Hopefully things have improved since then.

Availability and pricing information are not available yet. [Update:
It will ship for $399 in September, at least in the US]
Via Liliputing and CNET.