The Tizen Developer Conference took place in San Fransisco, on May 22-24, 2013. We’e already seen a few Tizen demos from the conference, but slides and media files (mostly audio, but also some videos) are now available for keynotes and technical presentations. 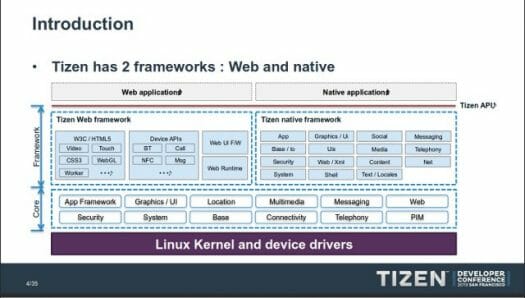 As this was just the second Tizen conference, there were still many sessions dealing with overall structure of the operating system, and explaining how to get started either with native or web development, such as:

Tizen enters a mobile world dominated by Android and iOS, so several sessions targeted app developers used to work with either operating systems in order to show them how to port their existing apps to Tizen:

Of course, they were also sessions, probably a bit more technical, focused on development of specific features:

And many more, as media files and slides are available for nearly 60 sessions and keynotes.