Freescale has recently uploaded a video comparison the energy efficiency of several micro-controllers: Freescale Kinetis KL02, Texas Instruments MSP430, STMicro STM32L, and  Microchip PIC24. Since it’s a Freescale video, we already know the winner, but the test they performed it still interesting, and it shows drastic performance differences between architectures.

The used the following exact MCU for testing:

Freescale did not really select tough competition such as NXP LPC800 Cortex M0+, but instead a Cortex M3 MCU, and older 16-bit MCUs. I don’t know if Microchip has a new generation of ultra low power 16-bit MCUs , but Texas Instruments, for example, launched MSP430 Wolverine MCUs at the end of last year. So this comparison may not be very interesting to find out which company has the best MCU in terms of energy efficiency, but as I mentioned above, we’ll see clear differences between architectures, and I find the setup used for testing interesting.

The hardware setup is shown below. 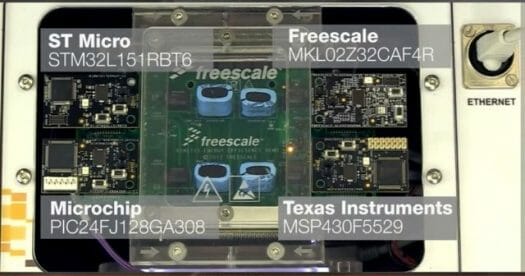 We’ve got four board with the MCUs mentioned above, with 4 fully charged capacitors, and a Freescale MCU measuring the voltage in the capacitor. 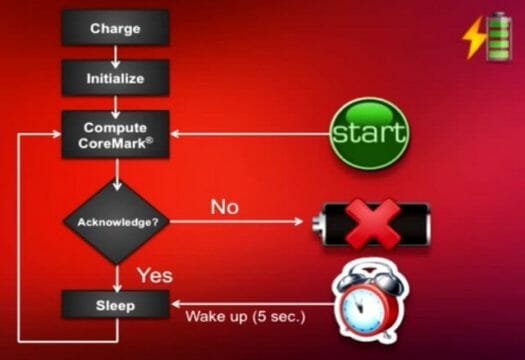 Each board is loaded with software that follow the flow chart above. Each board runs Coremark, acknowledges it’s done, sleep 5 seconds and repeat. If the voltage in the capacitor is not high enough for the MCU, there won’t be acknowledgment and the test ends. This power consumption “benchmark” measures the energy efficiency under heavy load, and not the standby power that may be the most important part in some applications. 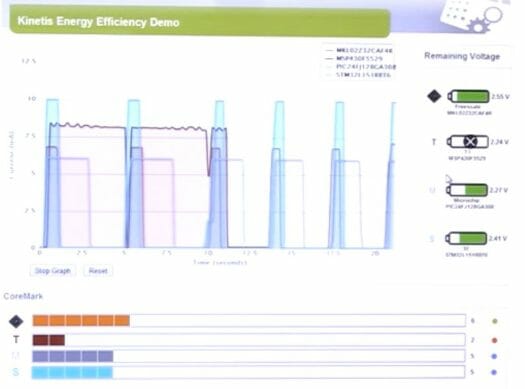 Then they visualize the real-time capacitor voltage level, CPU power consumption for all platforms. MSP430 is the device that takes the longest time to execute Coremark, and stops after only 2 cycles, because the capacitor can not deliver the minimum voltage required by the chip (2.2V). Microchip PIC24 stops after 12 cycles (1.76V), STM32L after 20 cycles (1.77V), and KL02 continues but we don’t get to see for how long.

You can watch the 5-minutes video to see the complete test.

They bring this bag to most presentations they do (like “design with Freescale” days) and show it off, so I saw it already twice in real, but it was with KL25, not KL02

This looks very unrealistic. Surely most battery-powered uC applications sleep most of their time, only waking up to do some brief I/O, not perform intense computations for sustained periods.

Coremark is a compute benchmark:
https://en.wikipedia.org/wiki/Coremark

@Ian Tester
You are the second person who asks about EFM32 (the other was in Twitter). They seem quite popular.
I guess they could not use EFM32 (Cortex M0+ version) because it would have been too similar to KL02.

This benchmarking is biased as it does not include EFM32 or the similar Precision32 MCUs. The EFM32 can operate all its peripherals with its CPU in deep sleep mode 🙂