When I first saw the large ESP-01 V1.0 board on Facebook, I thought it was designed to speed up firmware updates of up to 60 ESP-01 modules. The developer, Thanormsin, just explained it would take 5 to 24V DC input to power all ESP8266 attached to it. 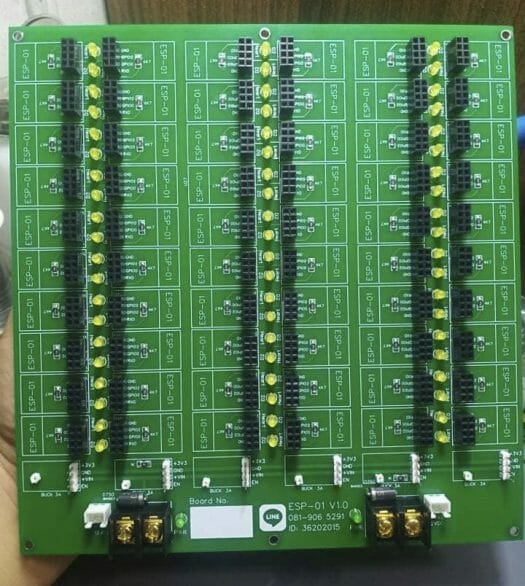 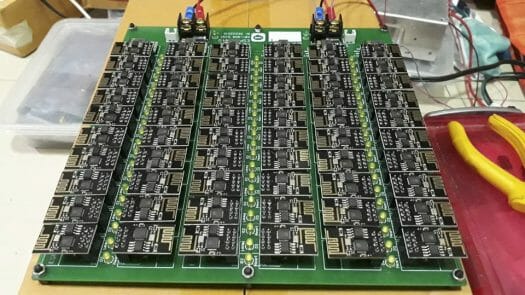 It looks cool to have so many But there was no PC interface to update the firmware, so it did not make sense to me, even if it could be used for OTA firmware updates, as the first time, one would have to manual update the firmware.

So I discussed with Thanormsin, and he explains to me his initial arrangement was a cable mess. 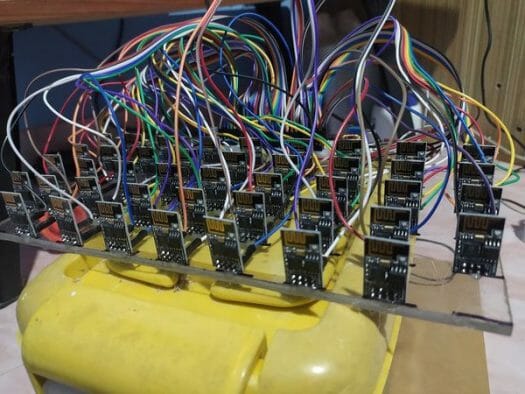 That is why he designed a board to make it neater, and easier to manage. Each ESP-01 module can update firmware from the Internet, more especially from Github, as each time a new firmware version is uploaded to Github, the wireless module will automatically download and upgrade to the latest firmware.

He adapted the code from programmer131’s ESP8266_ESP32_SelfUpdate repository that flash code to ESP8266 or ESP32 hardware from a firmware file stored in Github. 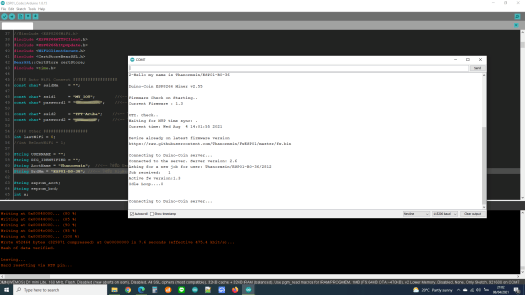 That’s only once he shared a screenshot of his Arduino IDE windows, that I understood the board was meant to mine Duino coins. I had seen a few people play around with Duino coin and Chia on Facebook in recent months, but I did not immediately make the connection.

Duino coin is designed to be mined on low-cost hardware like Arduino, ESP8266/ESP32, Raspberry Pi, and so on. There’s a self-hosted exchange to convert Duino Coin into other cryptocurrencies like Bitcoin Cash or Ripple. The developer says that Litecoin, Ethereum, Bitcoin, Dogecoin, or other coins with high fees won’t be added to the exchange.

So why does Thanormsin have this ESP-upgrade board? Does he/she sell ESP-boards, and puts a firmware on it before shipping? Or … ?

I think he just wanted to mine those Duino Coins in a more neat and convenient manner. He’s got 5 boards with 300 ESP-01 modules mining coins and connected to the Internet through a MikroTik router right now.

As I understand it, he can make more boards if people want it, but he does not have any website. The only way to contact him is through LINE or Facebook.

The other side of the board is completely wasted space.

Also, WTF? Duinocoin? Can’t a larger processor mine these a few thousand times faster? Is this some kind of art project to point out the pointlessness of crypto coins?

As I understand it, rewards depend on the hardware the client is running on. It’s more profitable on Arduino, less so on PC. But they don’t explain the coin system in detail, at least where I looked.

I’ve had a look at the project description and even some parts of the code. To put it simply they don’t really focus on performance by applying hard limits to different types of devices, and tying them with fixed difficulties. It seems that it solely works based on users’ laziness who will prefer to assemble many boards than writing their own multiplexed miner :-/

So, you’re saying it’s time to fire up that antique CM-1 in the basement? 😉

And their CPU miner implementation is so inefficient…

By the way I checked their miner’s source code. The hashing algorithm only involves a single SHA-1 operation (just why). So emulating the speed of an Arduino to mine this coin is definitely doable.

Yep absolutely. This coin only needs to be known to get severely attacked. Worse, due to the accepted very low difficulty for small machines, I suspect that attacks to the chain itself become quite possible. Well, at least as long as it runs on a single server this risk is limited but that looks extremely brittle. I guess the guy has a lot of fun working on this, though, and we must admit that it’s a nice accomplishment for such a young person. Let’s not be too harsh and leave him some time to learn from his mistakes 🙂

Following your idea, I took the time to implement a multiplexed miner for Duino coin.
It is not only doable, but also trivially easy.
(Also I happened crash the whole blockchain when meddling with its mining nodes lol)

Good job! This reminds me Espressif has a QEMU fork: https://github.com/espressif/qemu
I did not understand why this could be needed since the boards are so cheap anyway, but that could be a use case too…

Are there gerber files avalible for you board, or do you have some for sale?