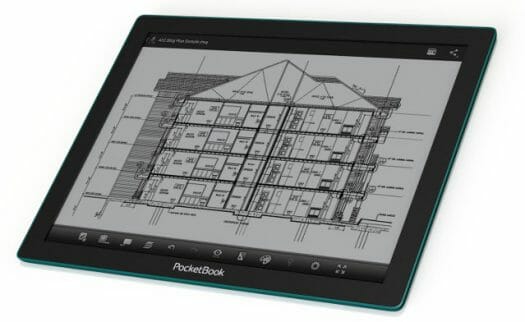 PocketBook CAD Reader integrates a 1GHz dual-core CPU (probably Freescale i.MX6 DualLite) running Android 4.0.4 with 2 GB of RAM and 16 GB of storage allowing it to hold plans for up to 200 constructions projects. The product also comes with built-in Wi-Fi & 3G modules, and a 8000 mAh battery. The built-in touch screen and  Wacom digitizer support both touch and a stylus for fine detail work.

But that’s the display that make it stand out. E-Ink claims that Fina displays weigh less than 50% of the weight of an equivalent glass based TFT and are less than 50% of the thickness, and the 13.3″ display module installed in the Pocket CAD Reader weighs about 60 grams. Energy efficiency and daylight readability are said to be the same as for other E Ink displays.

PocketBook CAD Reader will be showcased on December 5th at the Autodesk University software conference held in Las Vegas.

Ideal for textbooks when the price comes down… Does it refresh slowly like other e ink screens though? (Making ‘flicking through’ painful…)

does sony 13″ reader (japan only?) has the same screen? Anyway it looks great! Finally decent CPU (modern architecture) and amount of RAM, but probably will cost fortune…