Last month, Xiaomi teased the public with pictures of a new device, but gave very few details. The company have now provided further details, and the box shown below turns out to be an 802.11 NAS (Network Access Storage) powered by Broadcom BCM4709 dual core Cortex A9 Wi-Fi 802.11ac SoC. 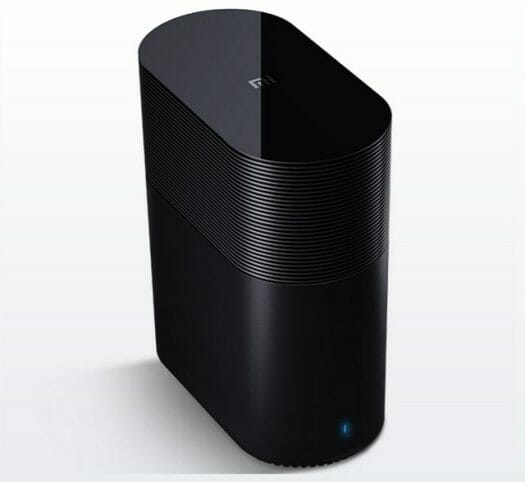 The company will launch a sale for Beta units on the 19th of December, for the Chinese market only, and the NAS will come disassembled in a wooden case with a TB harddrive, a power supply, cables, and the tools to put all pieces together. It will also include a membership card to access a movie download service. 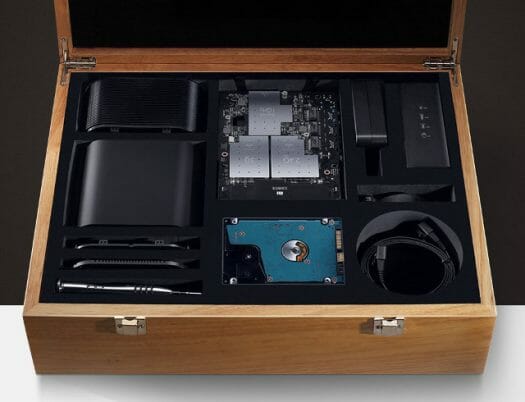 The SATA drive is inserted via the bottom side of the NAS, and the top features an NFC chip to communicate with a your smartphone. I understand (via Google Translate) that the NAS will be somewhat customizable, as you’ll be able to develop and install your own plugins, an smartphone app is available for management, and you’ll also be able to use it as an home automation platform to control your lights, aircon, TV, etc… It also appear the router features a technology, not involving beer cans, to direct the beam to extend Wi-Fi range. You can find details on miwifi.com (Chinese).

Retail availability and pricing is not available at this time, and the device may never officially be sold outside China, excluding of course, via sites like Aliexpress.

Comes disassembled in a wooden case??? WTF is wrong with them?

That wooden case is nice but dual core, only 256MB RAM… Slow but beautiful.

@adem
It’s most probably running Linux. If the box does not support DLNA / Bittorrent out of the box, I’d assume it would be possible to add these via plugins.

why is there x2 ethernet ports

@adem
It’s also a router, so maybe they expect you to connect it to the back of your (ADSL) modem, as well as an Ethernet hub.

@Leonardo
My thoughts exactly. The Zyxel NSA310 has 256MB and it’s cheap and old!

i don’t know my readynass duo v2 has similar specs and it does everything i want it to do i use it as a torrent uploaded and using my phone,tablet,android tv box or mk908 i can watch or listen to any video or audio content i want Marvell ARM CPU 256MB DDR3 SODIMM Two (2) Serial ATA II channels Hot swappable trays One (1) 10/100/1000 Ethernet port Two (2) USB 3.0 ports in back One (1) USB 2.0 port in front Embedded 128 MB Flash Memory for OS Kensington Lock security hole Software controlled 80 mm chassis cooling fan Dimension… Read more »