SoundPad 2, also known under the model name NA-307, is a tablet with a stand featuring two large (for a tablet) stereo speakers manufactured by Ampeq / Pan-Ocean Technology. The device can be used as a Bluetooth speaker, an Internet radio, and a standard Android TV box connected to your TV. It’s the first time I’ve come across this type of product, but Archos released a very similar item last year via its Arnova brand called, oh surprise!, SoundPad. 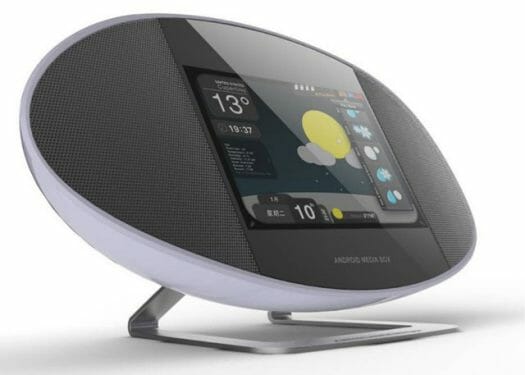 Let’s have a look at SoundPad 2 specifications:

The device runs Android 4.1, and can be controlled with an IR remote, or used with your smartphone as a Bluetooth speaker, and DLNA or Airplay receiver. When you connect the device to your TV via the HDMI port, the 7″ display with turn off, and you can connect input devices via the micro USB OTG port and a USB hub.

SoundPad2 comes with a USB cable, a USB to micro USB adapter, an IR remote control, a power adapter, and a Quick Start Guide. It’s currently available for $145.87 including shipping via DHL from a seller with zero feedback, as well as DealExtreme for $155.

Via AndroidPC.es, and there’s also a video on ARMDevices.net

“Auris Wily” on Kickstarter looks very similar, although it comes with a dual core processor.
https://www.kickstarter.com/projects/auris/auris-wily-the-portable-smarter-speaker-powered-by