In the last year or so, we’ve started using Android set-top boxes or mini-PCs to make our TV smart and play games, and some products such as Ouya and Gamestick, using similar hardware, have been specifically designed for game play. But Unu Tablet, which can be used as a tablet (really), can also transform your TV into a gaming platform, and a smart connected TV, thanks to a docking station, and a game controller. 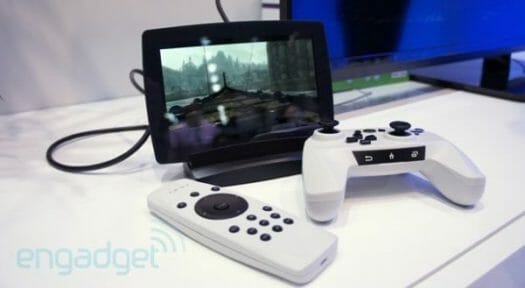 Here are the known specifications for Unu tablet:

This Android 4.2.2 tablet comes with a docking station that handles charging and video output, an air mouse with a QWERTY keyboard (similar to Mele F10), an HDMI cable, and an optional Bluetooth game controller.

This concept is not really new, as you can actually already do all that by yourself by purchasing different items, but it’s the first time I’ve seen 3-in-1 package sold and marketed that way.

You can watch an hands-on video shot by Engadget at E3 below.

The Media edition (Tablet + remote + docking station) should cost $200, whereas the Gaming edition with the Game controller should go for $250, with the device becoming available later this year.

Via Liliputing and Engadget

Now make this upgradable with a user-replaceable SOC & we’re getting somewhere :p