PIPO X1 is an HDMI TV Stick running Android 4.2 with more or less the same specs (2GB RAM, 8 GB Flash) as many other competiting products, but with a price much lower at $39.99 including shipping. The company however mentions the product is still in beta version, which may explain why it’s so cheap… Let’s have a look anyway. 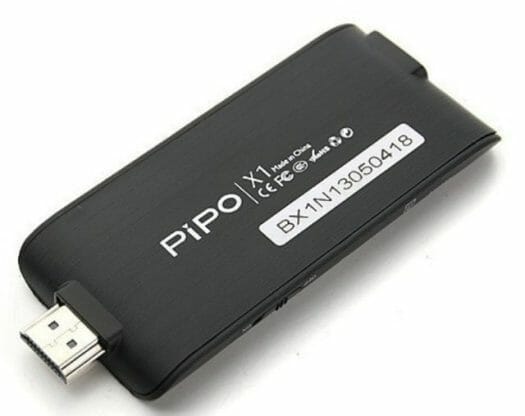 The device ships with a  micro USB cable. That means you’ll need to provide your own 5V/2A power adapter. The company also highlights the device can be used as Miracast/DLNA dongle and it supports XBMC, but these are now pretty standard.

There has been a PIPO X1, based on RK3066, on the market for a while, but the company clearly explains both are different devices in Aliexpress, so the specs should be correct, and at $40, the new Pipo X1 must be the cheapest RK3188 device on the market. Bear in mind, this is still a “Beta version”, so firmware may still need some work.

Now this I’ll buy, at least as a back up if not for casting. Dealing with Ali is the hardest part

Did any of you get yours yet? I can’t find any reviews online anywhere, and I’m curious to see how it actually performs…

still waiting for my one

I got mine today. I wrote a few things about it here: http://www.reddit.com/r/MiniPCs/comments/23pmsd/remember_the_post_about_pipo_x1_the_40_rk3188/

SidJenkins :
@Tired_
I got mine today. I wrote a few things about it here: http://www.reddit.com/r/MiniPCs/comments/23pmsd/remember_the_post_about_pipo_x1_the_40_rk3188/

ok, Only 1GB Ram, i am so strange why it can be sold so cheap, here is the reason, the 1GB ram and 2Gb ram have big price difference in china. and rk3188t not rk3188.
oh, shit, those aliexpress seller drive me crazy…

I got mine (grabbed it anyways, even though it only has 1GB RAM). Is there any kind of developer community for these kinds of devices? If so, where? I wouldn’t mind finding a custom ROM for it (something closer to vanilla Android), and it’d be nice to compare notes with other advanced users.