I’ve come across several robotic projects this week, so instead of picking one up, or writing a post for each, I’ll summarize the three products into one post. Two of the projects are educational robots based on Arduino, with the sub $50 Hack-E-Bot, or the more advanced RiQ robot, and Maker Club is a company providing the electronics for robotics kit, and you print the plastic parts with your 3D printer. 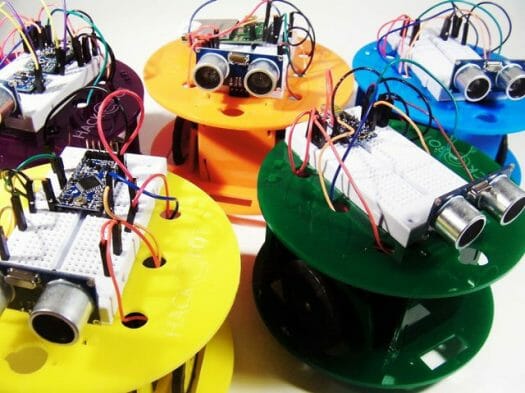 Hack-E-Bot is an affordable open source robot that hopes to encourage children to learn about engineering, electronics, and programming. The robot is powered by Adafruit’s Trinklet Arduino compatible board, connected to a breadboard, and some add-on boards sensors. The basic version comes with a Sonar sensor, but more add-on boards are on the way including bump sensors, a buzzer, colored lights, a claw, a servo scanner, and so on.

The project is listed on CrowdSupply, and has been funded. The campaign is closed, but you can pre-order a full Hack-E robot kit for $47 delivered in December 2014. Taking pre-orders after the campaign is completed is apparently an option on CrowdSupply that’s not found in Indieogo and Kickstarter. 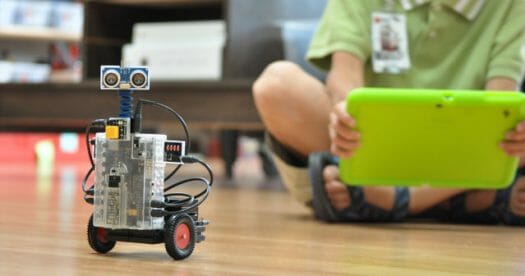 RiQ is a robot powered by an Atmel MCU (ATmega328P), with a Bluetooth, ultrasonic/light.infrared/touch sensors, LEDs, a servo driver, and up to four DC motors. It’s programmed with PCS Cortex 5.0 drag-and-drop software that reminds me of Scratch, and that can also show the actual Arduino code help learn actual coding. iOS, Android, Mac OSX, and Windows are supported, and the connection to the “PCS BRAIN” is made via  USB or Bluetooth. The company provides tutorials for six robots: “Scaredy Bot” whose afraid of light, “Art” drawing bot, “Red Rover” which can follow “lines’ made of IR light, “Bounced Bot” to demonstrate the use of buttons, “Bat Bot” for obstacle avoidance with the ultrasonic sensor, and “Illumi Bot” which flashed bright LEDs.

You can find more information, and/or pre-order RiQ Robot Kit for $199 on Edventures Lab’s RiQ Robot page. Shipping is scheduled for mid-November.

Maker Club bots are also controlled by an Arduino compatible board called MakerConnect with Bluetooth Smart (BLE) connectivity. But instead of providing complete kits with all parts, the company will simply send you the electronics, and provide the CAD files so that you can 3D print your own robots. This saves on shipping (in theory), makes it more fun to build the robot, and easier to get replacement parts.