ODROID-C1 development board was launched on December 10, 2014, and a few days later U-boot and Linux source code was released for this low cost Amlogic S805 board, but Android was only due later due to licensing issues. I’ve just noticed Hardkernel uploaded Android 4.4 source code to github at the end of February. 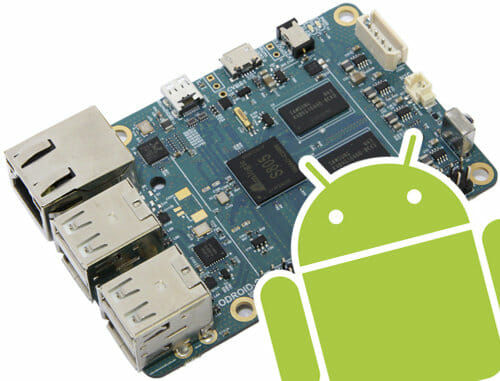 The build instructions are provided on ODROID-C1 wiki, and there are quite straightforward.

You’ll need to type four command lines to get the code in a working directory:

and three more to build an Android image:

That means developers will be able to easily customize source code for ODROID-C1 board, but they should also be able use this base to work on other Amlogic S805 devices.

Noone cares about odroid now as we have rpi2

Maybe, but hardkernel’s release of sources (property parts are precompiled) gives opportunity for developing for other Amlogic M8 based devices too.

If you see here:
https://github.com/codewalkerster/android_device_hardkernel_odroidc/blob/s805_4.4.2_master/BoardConfig.mk#L40

you’ll notice that binaries are optimized for cortex-a9, not a5. Not sure tho why, same is with original aml sdk.

check it for us?

@david
It’s also possible the R Pi2 raised awareness for the ODROID-C1, and increased sales.
My R-Pi 2 vs ODROID-C1 post is by far the most popular on CNX this year.
But it’s difficult to know for sure since Hardkernel does not release sales numbers.

Hi Jean-Luc.
I have bought a C1 and i’m very happy with it.
It’s fast it works.
The Linux inside is almost good as my desktop.
One thing it doesn’t slug as pi1 to open a web page that’s for sure even without overclock.

R Pi 2 doesn’t support Android… I Have a C1 too, and I’m happy with the oficial Android, but this opens the possibility of more ROMs.

yea, the worst of rpi2 is lack of android support.
Now c1 have android w/source, anyone known if this source is enough to compile kernel drivers… sometimes usb tv tunners require dev package, but are this package generic or platform specific?
also rpi have csi and c1 not, but csi in rpi is not open, so you can’t connect a sensor and try to make work by yourself, making your own driver… so not really useful, because you are restricted to supported modules w premade drivers… not good to hack n learn.

@david
I’m sticking with my c1’s for now (with ubuntu ). Need the faster networking.

Company I’m doing some contract work for, wants to try rpi 2’s but the networking
will be the problem – continuous 1Mb mjeg stream in + overhead + license dongle access + other usb traffic

For Odroid C1 there is also an experimental (but working) image with Android Lollipop 5.1 r1 :
https://github.com/peyo-hd/device_aml_odrc

The same image is proposed for Raspberry Pi 2, too:
https://github.com/peyo-hd/device_brcm_rpi2