A few slides have been leaked including ARM Cortex-A roadmap, allowing to have a peak at what the future will bring after the recently announced Cortex A72, and other existing cores. There’s nothing about performance, but this provides details about the next cores codenames and their manufacturing process. 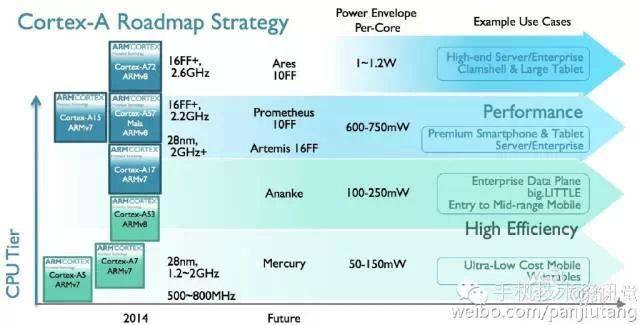 ARM cores are sorted into 4 categories:

There aren’t any date on the slides, but the new cores might be announced in 2016, before we see them in SoCs and products in 2017.

Via Liliputing and Fudzilla

Seems that a dream of having ARM 64-bit powered laptop is more and more realistic.

@davidlt
Indeed, but the problem is single threaded performance. IIRC powerful cores of A line are just 3 issue, while for example Intel’s sandy-bridge is 6 issue and haswell 8 issue core. So those cores are still not comparable unfortunately.