Last year, Amazon launched the Amazon Fire TV box based on a Qualcomm Snapdragon processor for $100. The company has recently introduced an upgraded model powered by Mediatek MT8173 quad core processor (2x Cortex A72, 2x Cortex A53), and with support for 4K videos, while keeping the same price tag. 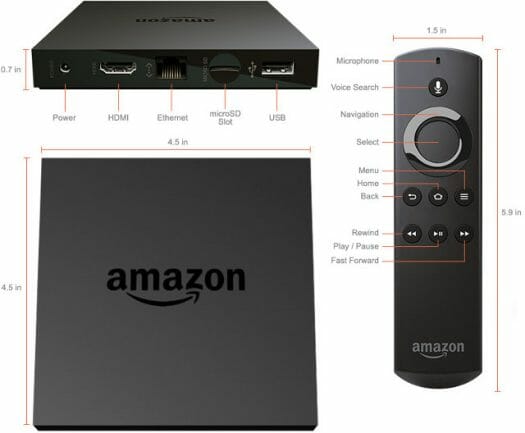 The device will run Fire OS 5 based on Android 5.1, and including its own voice assistant: Alexa. Amazon Fire TV will ship with Amazon Fire TV Voice Remote, a power adapter, two AAA batteries and a Quick Start Guide. There’s also a Gaming Edition which replaces Fire TV Voice Remote by Fire TV game controller, and adds a 32GB microSD card, as well as Shovel Knight and Disney’s DuckTales games.

Amazon Fire TV 2015 can be purchased on Amazon US for $99.99, while Amazon Fire TV Gaming Edition goes for $139.99, and the products are scheduled to ship on October 5. The remote control and game controller can also be bought separately for respectively $29.99 and $49.99.

@Demetris … i always ask myself the same … why not giga controller ? with such powerfull SoC combo, i still miss giga lan cable … that will always be better than wifi ac. Gigalan makes the perfect combo for Kodi and a NAS with a lot of BDs/3D, and other hd files to be played. I also miss optical jack … 🙁 damn i have a great … i mean a monster high-end amp a great sound, but it’s the best of the last generation – so optical /coax … no hdmi. But it does not mean it’s a… Read more »

Agreed on the gig-e although the best these boxes do is around 300-400Mbps but still far better than a measly 100Mbps. And no 2160p60? Missing a few crucial elements to be more than sheeple fodder.

More people with wifi than Gb ethernet these days

Will be interesting to see how well these play, compared to the signage boxes we use (cisco dmps, signetix, intel nucs etc as you can add an extra zero for the pricing for all those)

Compared to most other similar ones, Amazon should have a fairly reasonable length of support
(maybe except apple tv)

USB support seems a bit slow and limited. Also, how do you get HiFi audio out to your hifi system ?

@paul
I don’t have either devices, so if a power consumption comparison is written, it won’t be done by me…

Too bad the ethernet port is a joke. 10/100 Mbps 10 years after every laptop in the world ships at Gigabit and some servers ship with 10G onboard… Feels so 1990. Let’s wait for a serious brand to make some serious hardware.

Can this Soc be software upgraded to give HDR or does HDR need hardware support built in.