Vigek IOT Core packs an STM32 MCU, a Realtek WiFi module, and 8-bit camera interface into a 3.6×3.75 cm board. It also provides GPIO, PWM, and analog input to interface with external hardware such as sensors, and the project had a modest, yet successful, Kickstarter campaign in the summer. 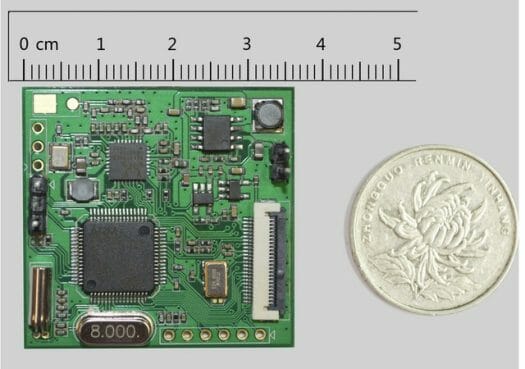 While Vigtek IOT Core can be used without programming, simply using an Android app to control the camera, and I/Os, the company also provide an APP SDK, firmware API and open server for people who require more customization. While the company did not exactly provide detailed information about the SDK, APIs, and server, they did relese the software architecture diagram. 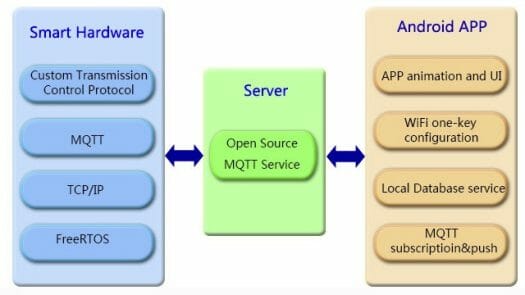 This shows the board runs FreeRTOS and can interface with an open source MQTT (mosquito) server and be managed and controlled via an Android app. Since the board is about to ship to backers, I was expecting a little more documentation and access to source code at this stage, but I could not find anything.

Since the crowdfunding campaign is now closed, I contacted the company to find out if it was possible to order to board via other channels, and they  replied that I could select one of the rewards from Kickstarter, send over with my details to receive an invoice to pay over Paypal, and that I’d receive it at the same time as Kickstarter backers… For reference, Vigtek IOT Core board was $16 CAD (~$12.25 US), and the kit including the camera was $25 CAD (~$19 US). You’ll find some more details on Vigek website.

The camera interface is not usable for video. It is used for something like robot vision when the robot is trying to find a power socket to recharge. So take a snapshot, process on it for a while, move the robot, repeat. There is no video compression hardware on the chip.

@Jon Smirl
Good point, which reminds me somebody did something similar with ESP8266: http://chynehome.com/web/camera-ip-wifi-avec-une-camera-serie-jpeg-et-un-module-wifi-esp8266/