TESPA Hawk is an IoT board designed by three companies based in Thailand and Singapore: Deaware delivers the embedded software for the board, Gravitech handles hardware design and manufacturing, and MakerAsia provides the IoT cloud platform. At first glance, it looks like yet another board based on the popular ESP8266 WiSoC, but it also includes an STM32 micro-controller, and its pinout is the same as Arduino Nano. There are also various add-on boards (WINGs) to easily and quickly prototype IoT projects. 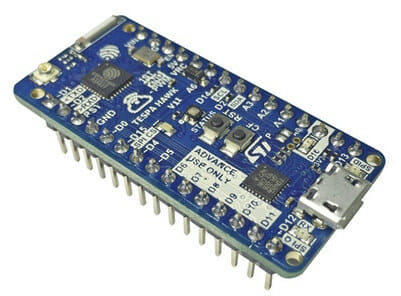 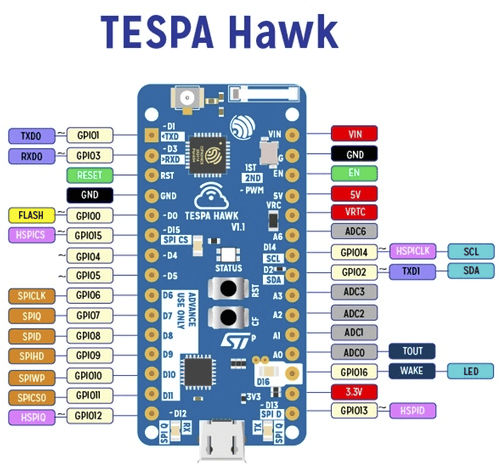 Development is done using the Arduino IDE, and both ESP8266 and STM32 micro-controller can be programmed. The initial WiFI setup can be done using TESPA mobile app for iOS or Android, and multiple Hawk boards can be configured that way in one go.

The companies also designed 20 WINGs to quickly add functionalities to the Hawk board such as terminal blocks, micro SD slot, sensors, some extra ADC converters, motor driver, 128×64 OLED display, RGB LEDs, and so on. 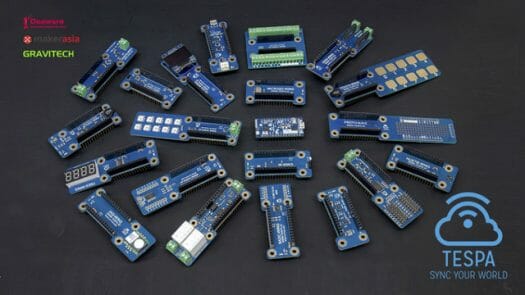 The IoT cloud solution is free and optional, and allows you to control the board using a mobile app or a web browser, and includes features like geo-fencing, iBeacon and Eddystone, MQTT, and more.

The team did not promise open source hardware, so I assume the hardware design files will remain closed source, as in many projects. I can’t find much information about the software and firmware, and documentation appears to be inexistent at this stage of the project, but hopefully experience of the Arduino IDE you should be enough to get started. You can watch the presentation video to meet the team, and find out more about TESPA Hawk board, and the list of WINGs add-on boards.

The project launched on Kickstarter a few days ago, and so far raised about $7,500 out of their $30,000 goal. Rewards start at $15 for a TESPA Hawk board, and they have various kit with the board and WINGs up to the $200 set with two TESPA Hawk boards and all 20 WINGs. Shipping starts at $2 to Thailand, $3 to the US, and $6 to the rest of the world for a single board, and up to $15 for larger kits. Delivery is scheduled for November and December 2015.

Further details should eventually be added to tespa.io website.

Really Interesting board and I think the programming is for the STM32 only and the esp8266 just acts as a shield for it ?

@Abdullbasit
They haven’t provided much details in the description, but one comment reads:

Yes, the BOOT1 is accessible via a jumper pad. So yeah you can program the STM32 MCU! Or you can use our Arduino library to control the STM32 MCU. Yes, the STM32 MCU firmware can be easily updated.

Hi, I’m Sharnon Tulabadi, one of the co-founder for this project. For normal users they only write the code in ESP8266 chip (there is a MCU inside the ESP8266 chip). However, for advance users they can program the STM32 as well.

Thinking about it a bit, I am pretty sure they are using the STM32F042 as a USBserial interface and possibly to program the ESP8266.

How about this board for 11$ ?
http://www.itcamefromtheworkshop.com/2015/04/the-cactus-micro-11-arduino-compatible.html

Also, do you plan writing some more details about eddystone in the near future ? And maybe about some cheap chinese beacons ?