Microsoft announced Windows 10 IoT Core for Raspberry Pi 2 and Minnowboard MAX boards a few months, and now the company has added a new ARM board to their Windows 10 IoT program with the soon-to-be-available Qualcomm DragonBoard 410c development board compliant with 96Boards specifications. 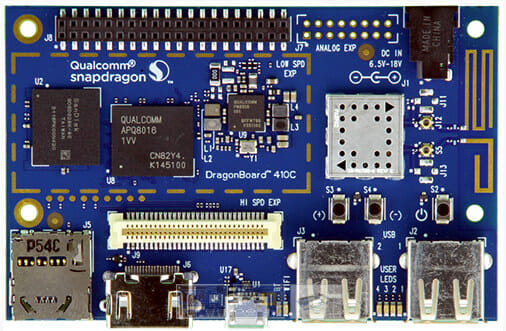 Windows 10 IoT Core for DragonBoard 410c adds support for onboard WiFi and Bluetooth, as well as DirectX graphics on top of features already supported on the Raspberry Pi 2. To get started, you’ll need a computer running Windows 10, and follow DragonBoard’s Winfows 10 IoT Core guide.

I assume most people familiar with Linux operating systems won’t suddenly jump ship to run a Windows operating systems, but Windows developers who got used to work with Visual Studio may be more comfortable with Microsoft’s environment. Out of curiosity, I’ve checked out if anybody had done any project with Windows 10 IoT core, and was surprised to find 186 projects on haskster.io.

Dragonboard availability has been an issue for many months now…Even Amazon’s Dragonboard IoT kit is currently showing December 7 – December 22 as the ship date: http://www.amazon.com/DragonBoard-410c-Kit-Powered-AWS/dp/B01600X7IU/

Since they make the board, it should expected they’ll be able to ship it a little earlier.