ARM TechCon 2015 has just started, and there have been a few announcements including the launch of a Cortex-A7 replacement with Cortex A35 providing 10% lower power consumption, 6 to 40% performance boost, and a better design flexibility making it suitable for SoC for smartphones to wearables. 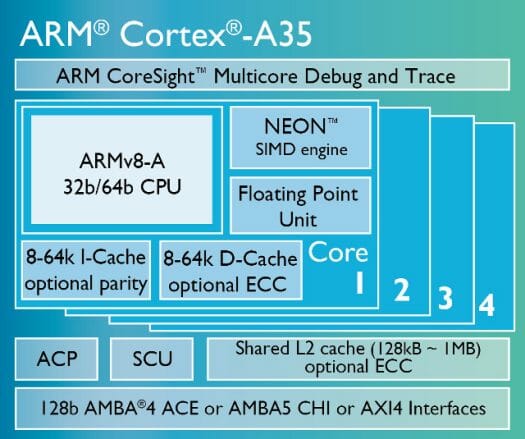 The main specifications of Cortex A35 cores:

Cortex-A35 also consumes about 33 percent less power per core, and occupies 25 percent less silicon area compared to Cortex-A53. Considering quad core Cortex A53 devices ship for less than $50 today, you can expect ultra low cost (and low power) smartphones, wearables, and set-top boxes by the end of 2016. Cortex A35 is also expecting in low-power servers and smart TVs.

Some of the key features of ARMv8-M include (new in bold):

There will be two variants with ARMv8-M Baseline and ARMv8-M Mainline, with the latter adding optional DSP and FPU, more instructions, etc…

Charbax is at the conference and did a good job at filming Mike Muller, ARM CTO, keynote, where he unveiled both Cortex A35 and ARMv8-M, beside addressing imprinted circuits, ARM servers (arm.com is now running on those), weak security for IoT applications, CryptoCell 700 series for Cortex A processors, Cryptocell 300 series for ARMv8-M, and mbed OS 3.0. He concludes with the new industry equation: (trust x perf)/(energy x $) to emphasize the importance of security.

I think the naming is rather unfortunate as it’s easy to confuse A35 to A53. It’s something you seem to have done while writing this article at least 2 times I think.

@Marius Cirsta
It must have been four times…