I test a fair amount of features in my Android TV boxes review, but I usually don’t test Netflix and other premium online video services since I don’t have any such accounts. These kind of applications appear to be limited by the DRM features enabled in Android. For example, Full HD and 4K video streaming in Netflix requires Google Widevine Level 1, and most devices only come with Level 3 which only supports standard definition, due to cost reasons.

So I decided to look whether I could find an app that would list DRM features, and DRM info appears to be it. 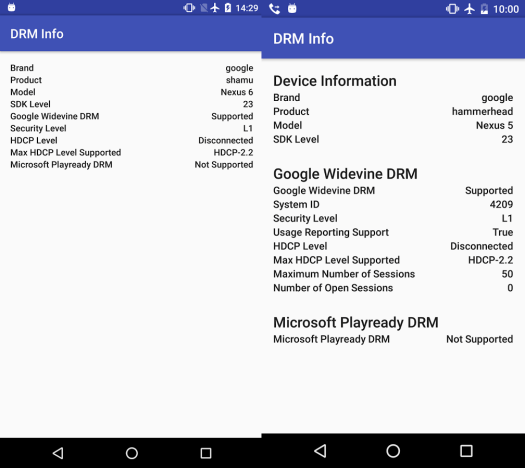 So it looks like a neat and easy way to test DRM features of Android device, so I installed on my Mediatek smartphone, and unfortunately it crashed at startup. So I tried on WeTek Core, which I know supports Level 1, and I had the app would just show a white screen for a second or so before exiting…

It looked promising, but it did not work on two of my devices. Do you have any better luck?

[Update: The app has now been updated and work on my Android smartphone. I could not try on WeTek Core, as a firmware update has rendered the device unusable 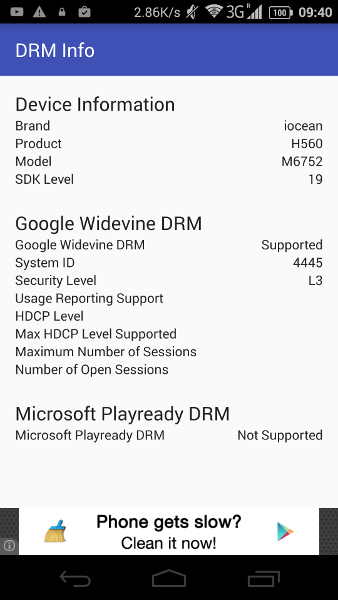 So only Widewine Level 3 for my phone, and no Playready support.]

Same issue on OnePlus One!

On my OPO, it seems to crash in v7 compat (Android 2.1) binary xml layout expansion, which is quite strange.

Wasn’t bored enough to look further, but it does seem to have resources for v21 (Android 5.0)

HTC m9, Widewine DRM L1, no problems with the app.

The developer has fixed the bug overnight. It’s now working on my phone.

Do you have a Nvidia Shield TV and/or Google Nexus Player to test?

download feature will be disabled on the rooted device even you can side loaded the application.