Espressif teased about their ESP32 WiSoC with WiFi and Bluetooth LE a few weeks ago in a letter addressed to developers, but did not release that much information. The company has now released some documents in the forums (registration required) concerning ESP32 module  including PCB processing requirement, schematics and PCB layout, and bill of materials.

The very first modules will actually be based on ESP31 processor, which only slightly differs from ESP32 with some swapped pins. The BoM is pretty small with several capacitors and resistors, one inductance, a 26 MHz crystal, ESP31, and a Gigadevice flash. 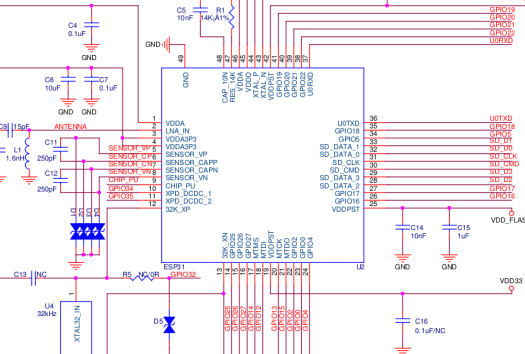 I’m not sure about this but I believe ESP31 is new ESP8089, ESP32 is new ESP8266. ESP31 is a peripheral for use in a tablet. ESP32 is a standalone SOC. Again I don’t know for sure, but I think the difference is the mask ROM on the chips. The ROM changes the SDIO port from being a slave port in the ESP31 to a master port in the ESP32. The ROM has to change this, otherwise the chips can’t boot. So this module is for use in a tablet. Which makes sense, the sales volume of the ESP8089 far exceeds… Read more »

.pcb files – you can try the ‘pcb’ app in linux (apt-get install pcb). It may or may not work as the pcb app doesn’t seem to force file extension to the layout you save , but it’s worth a try.

@olin
No luck. I guess I need to use one of the Cadence programs, but usually PCB layout is .brd extension.

we have 2 versions of ESP32. One version is the current version (which we internally dubbed as ESP31), and another is the final ESP32 to be released next year. The differences in pin out is a minor, with a couple of pins being swapped. So please take note of the differences; both versions will be released.

@Andrzej
Thanks! Interesting software, although Windows 7/8 only. I had no luck importing the DSN schematics (I only see a log file), and the PCB file is an unknown format (Both with Protel and PCAD .pcb imports).

@Jon Smirl
According to this, the ESP8266 is a ESP8098, maby with some ROM changes.
As for the SDIO/SPI/UART boot options it depends on how it is connected see more here.

It looks like you have CAP2 not used correctly according to the datasheet. Should be 3nF|20k, not 14k. I think.

@CNLohr
Also, CHIP_PU should not be left floating. Always pull-up?

@CNLohr
It’s quite possible there are mistakes. Those were the schematics released by Espressif last November, nearly a year ago.
You’ll find the latest @ http://espressif.com/en/support/download/documents?keys=&field_type_tid%5B%5D=13