FTDI found out that the original Arduino UNO R3 boards had issues handling higher loads with 9V and 12V power input being limited to about 800mA and 300mA respectively before the voltage of the 5V regulator drops, so they decided to make their own supporting up to 1A. 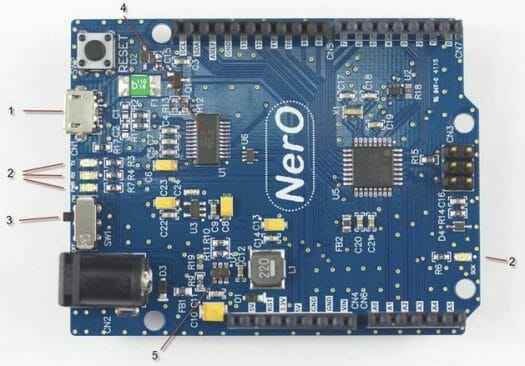 The board is manufactured in Europe by MikroElektronika, a company which I started the hear about more and more, especially since they’ve launched their mikroBUS standard connectors. The board is of course fully software compatible with Arduino UNO R3 board, and the main difference is about how it handles power. FDTI uses a shield with multiple resistors to test the load, and that the results they got on the original Arduino Uno R3 (not some Chinese clone).

The horizontal axis represent the LDO regulator external temperature, and it gets really hot (100 C and more) as the load increases.

While with the switching regulator used in NerO, the voltage remains around 5V up to 1A, and the temperature never exceeds 60 C.

Other tests also show much higher efficiency of NerO regulator (80 to 90%) compared to 30 to 50% for the LDO regulator on the original Arduino board.

FDTI designed the board for another project (CleO 3.5″ display for Arduino boards to become available in three months), but thought some people may be interested by the NerO, so the company launched a Kickstarter campaign, where you can acquire the board for 10 GBP (~$15 US) plus 2 GBP ($3) shipping, unless you live in Singapore where you can pick the board yourself. Delivery is scheduled for February or March 2016.

OLIMEX have similar arduino variants with switching mode DC/DC since several years. I think they use MC34063 and support 24V input.

@gicho
I can’t find UNO variant on Olimex, but for example, would OLEMEXINO-32U4 Leonardo board have similar power characteristics? https://www.olimex.com/Products/Duino/AVR/OLIMEXINO-32U4/open-source-hardware

They mention “ULTRA LOW POWER voltage regulators and the consumption is only few microamps, which enables hand-held and battery powered applications”.

This one uses MC33063 as regulator – it is not “low power” at all, but it can withstand 40V (well, Olimex put only 35V cap on the input), also no transient protection (overvoltage) but there is reverse polarity one, an no input filter so probably not quite EMC friendly.
In addition it has li-ion battery charger.
Generally, quite useful for some home automation where one wants to dustribute power from one central supply (maybe with backup) to multiple nodes over long wires.

Really ? a kickstarter campaign on an arduino ? What did they add ? a switching regulator hah?
So I’m going to launch a campaign too and I’ll call it Arduino-LED (An Arduino that has an extra LED) 😀 .