Idein, a Japanese startup, has been working with a Raspberry Pi compute module to create Actbulb, a multi-functional device for applications using computational sensing and data analysis, and that fits in a regular light bulb socket. But for their internal testing, they’ve decided to create a cluster for 16 Raspberry Pi Zero boards. 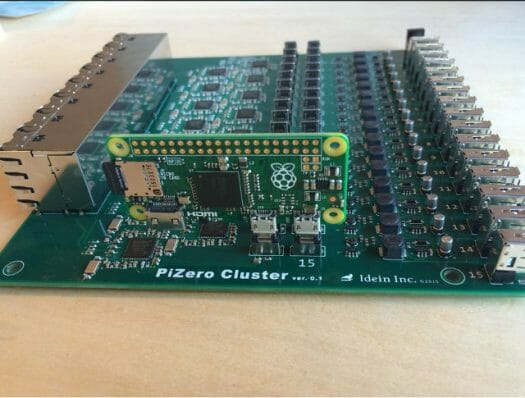 PiZero Cluster board has 32 micro USB ports for power and data, two for each Raspberry Pi Zero board, 16 USB type A ports, and 16 Ethernet interfaces. They’ve likely done this board for testing their ActBulb, as Koichi Nakamura, Idein CEO & founder mentioned that:

We are making a sensing device that uses Raspberry Pi compute module. So we need many Pi’s for the development and tests. Since we will use Pi’s GPU for image processing, deep learning, etc. We need real Pis but not just Linux machines. Another reason. It can be used for flashing eMMCs of our devices via USB ports when we have to do that by ourselves. 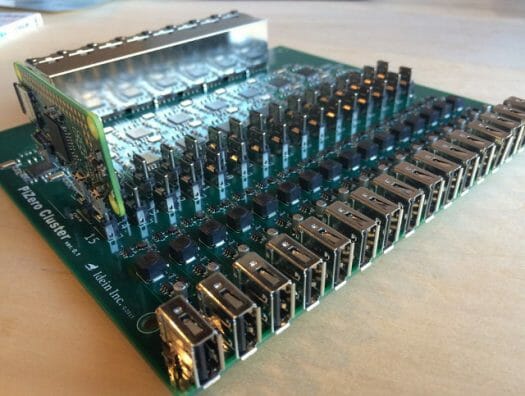 You may have noticed that there’s only one Raspberry Pi Zero in the cluster board, simply because they don’t have more, and the boards are not available for sale. The Raspberry Pi foundation is making more , but they will only allow one per customer for now due to the high demand, so it may take some time until they get their 15 other boards, although I guess friends and family could help…

[Update: Since they had quite a lot of feedback, the company has now plans to integrate an Ethernet switch, add GPIO headers, etc.. and likely sell it. See new tweet]

Any way of getting a raspi zero in TH ?
Also, can you tell me if there are any shops in bkk where I can get my hands on some SBCs on retail rates?

@sky770 I don’t think Raspberry Pi Zero is available anywhere. Eleemnt14 even removed the listing last time I checked. But usually I prefer buying outside of Thailand. It’s too expensive here. But if you really want to buy locally try with Element14 (they only have Thai website, so you may need somebody to help in case you can’t read Thai). Another relatively well know shop for boards is thaieasyelec.com. In Bangkok, maybe try Pantip not sure. I never go to Bangkok, except to the airports. I also buy products on Lazada sometimes, but again it’s often cheaper on eBay, at… Read more »

Hm, this is just a board to mount 16 usb boards with breakout for usb and network.
It would have been much nicer if there was some form of interconnectivity between them (e.g. by adding a router chip that would put them all on a small local network). This way lots of additional plumbing needs to be done

The zero has also mount holes, so it would have been easier and cheaper to simply use those to stack the PIs. Too bad the PI zero does not seem to support ethernet over HDMI.

@zoobab
Since the RPi SoCs have no native Ethernet it seems they used the ‘usual’ LAN9512 (USB hub with integrated Fast Ethernet) 16 times on the board. Would’ve be a smarter move to also put something like the BCM5321M (switch IC with 16xFE and 2xGbE) on the board and another SoC acting as ‘master node’ being able to switch on/off the other nodes.

Note that the £5 pricing for the RPi Zero was a promotional offer and the actual price will be a lot higher according to people I’ve talked to at Farnell.

No Pi Zeros yet but I always find RS to be quite good in Thailand – not always the cheapest but never had any issues.

Have one here spare if you need it.

Maybe you should do a crowdfunding like setup, ie donate a Pi0 and get n% off one of these boards.
Pretty sure the robotics folks would help, a 16 node Pi0 would be one hell of an AI rig.
Thats about 20 times more processing power than a Core2 Duo for certain apps but a much lower power draw.

@Conundrum
In what processing usecase would a Pi beat a Core2Duo (ok, maybe it would be better at decoding h.264) when it comes?

In general I somehow fail to see the point of these slow CPU clusters (unless you really want to have a physical cluster, I guess).

Where can I buy this??

@MrRobot
You can’t. At least not for now.

We’ve decided to start a crowd funding of PiZero Cluster Board (improved one) very soon. We will try hard to deliver 1st lot in this spring.

So we need many Pi’s for the development and tests. Since we will use Pi’s GPU for image processing, deep learning, etc. We need real Pis but not just Linux machines. Where such information?

@precinun
In one of the comments in their twitter feed.

Is this cluster available?

@Alan Moore
They don’t seem to have launched it yet.

I’ve clearly put too much thought into this, while not having the ability to implement it in any way! 🙁 Build a Pi Zero cluster hub by combining a Microchip USB2517 7-port USB hub, with a CP2108 4-port USB UART chip. Each Pi Zero (max 4) gets its own microUSB connector, plus a UART connected to its console. By properly implementing the USB power spec, one should be able to enable or disable power to individual Pi Zeroes, while monitoring their consoles. There is no real need for anything else, as each Pi Zero can be configured to provide USB… Read more »