After several delays, BBC is now giving free Micro:Bit Bluetooth LE enabled boards to UK students with the goal of getting them interested in coding and electronics in a way that’s even easier and cheaper than using a Raspberry Pi board.

There are four ways to “code” the board: Code Kingdoms JavaScript  graphical ‘drag and drop’ and text-based programming, Microsoft Block Editor graphical, drag and drop code editor, Microsoft Touch Developer text-based programming language, and Python. I was unclear on how they’d use the rings, until I found this picture showing crocodile clips connected to the board, and Kitronic has made add-ons boards and kits using the 20-pin edge connector. 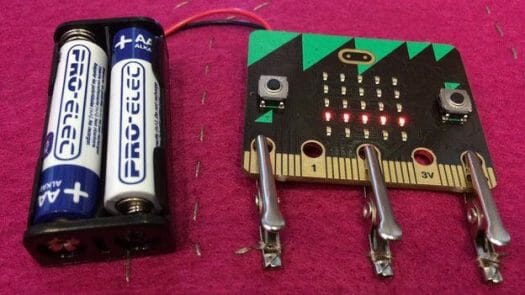 There’s currently now way to buy one of those yourself, but if you have kids in the UK, the BBC is giving the board directly to young students, i.e. they don’t belong to the schools, so you might be able to play with it at home. According to BBC News, some people have complained that the board can come to late for teachers to integrate them in the curriculum before the end of the school year, so we’ll have to see how it turns out. Some projects have already been showcased with a school sending a micro:bit at the edge of space.

There is micropython for it:

… and Espruino Java Script, including an IDE connected over Web Bluetooth:

@Zoobab
impressive that they can squeeze it in 16KB of RAM
but they have to flash the runtime and the python script each time (uflash).

Do banana plugs also fit in the holes? Oshw? Any clones? Are the ide licenses tied to a hardware id?

@baoboa
Why? Can’t you just send the script to the runtime and have it self-program reserved flash pages?

This SOC has some breakout boards on Aliexpress for 6usd.

They are not the same as the microbit, but they could be a good start to make an open hardware clone of the microbit.

Seems popular “Farnell element.14 has begun to ship 65,000 micro:bit computers to schools in Denmark as part of an order from Boarding on behalf of the Danish Broadcasting Corporation.

The three-year ‘ultra:bit’ programme, will use the micro:bit in the classroom to help transform Danish Year 4 students from passive technology consumers to digital pioneers.”