Thread was announced about two years ago, as a new IP-based wireless protocol based on 6LoWPAN and 802.15.4 standards and targeting IoT applications. Nest Labs,  an Alphabet company, has now released OpenThread open-source implementation of the networking protocol under a BSD license. 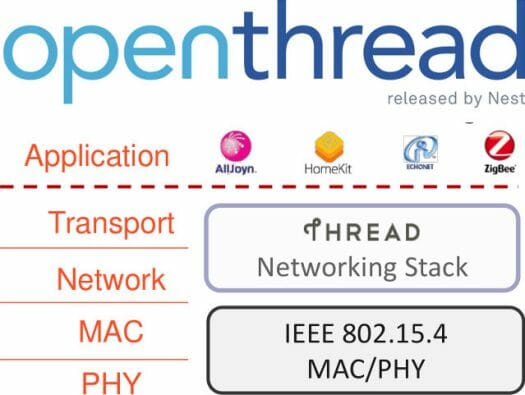 The source code (C++)  for OpenThread includes supports for End Device, Router, Leader & Border Router roles, and  can be found on Github. The implementation is said to be OS and platform agnostic with a radio abstraction layer, have a small footprint, and implement all Thread networking layers, namely IPv6, 6LoWPAN, IEEE 802.15.4 with MAC security, Mesh Link Establishment, and Mesh Routing. To quickly get started, you may want to read the Examples README which explains how to build the code, start two nodes, and ping them.

Interestingly, while the code is there for everybody to use, only paid members ($2,500 to $100,00) of the Thread group can access the full specifications.

Doesn’t support commissioning yet and no guidance on name or logo usage.

@Deets
Thanks for the feedback Deets. Please file a feature request on Github: https://github.com/openthread/openthread/issues/new

Note about the logo – we’ll add some language. Thanks!

I strongly suspect that you’ll need to pony up the membership- it’s probably akin to the same deal with ZigBee. At least they have smaller fees now. It was $15000, straight up- nothing else. Doesn’t support commissioning, though, means it’s pretty damn much useless.

You’d think they’d have learned a thing or three over the years- what makes this **ANY** better than ZigBee? At least with it, you can commission things and there’s reference implementations against several classes out of their ClassLib.

What about letting non-profit open source projects such as Domoticz and OpenHAB join for free?