Wi-Fi is a neat way to connect devices to Internet, but it has two main inconveniences: relatively high cost and power consumption. Luckily there are standards that addresses the cost and power consumption issues. Radio chips based on IEEE 802.15.4, a standard which specifies the physical layer and media access control for low-rate wireless personal area networks, are common place and found in many existing devices relying on higher level wireless protocols such as ZigBee, ISA100.11a, WirelessHART, and MiWi. AFAIK, Zigbee is the most popular of the aforementioned protocols, but is hindered by the requirements of the license for commercial products (annual fee), Zigbee membership requirements conflict with many open source license such as GPL, and the standard suffers from lack of interoperability and IPv6 support, and power requirements that are too high for some applications. So a consortium of seven companies namely ARM, Big Ass Fans, Freescale, Nest, Samsung, Silicon Labs, and Yale Security, have come together to start working on “Thread”, a new wireless protocol leveraging 802.15.4 standard and existing transceiver chips,  that is legacy-free, and is based on 6LoWPAN (Low Power IPv6 connectivity), and UDP protocols. 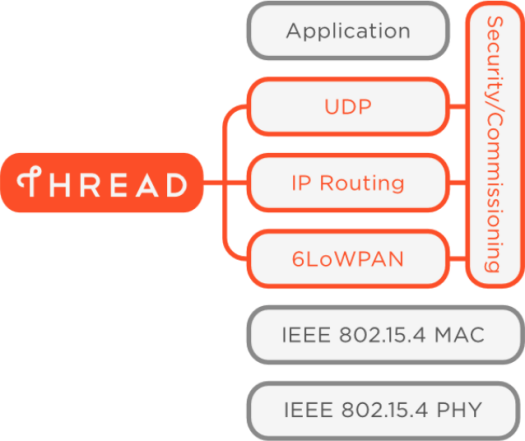 Thread specifications are currently work in progress, but it will be a low power IP based open protocol supporting mesh networking (Up to 250 devices), that is both secure and user-friendly, and provides fast-time to market thanks to existing radio silicon. It will be used in various products such as electric appliances, access control, climate control, energy management, lighting, as well as safety and security devices. Two products companies are part of the group Nest and Big Ass Fans, so thermostats and fans based on Thread are likely to be available soon. Nest V2 actually comes with a 802.15.4 capable SoC (Ember EM357) that used to be disabled, but “is already being used successfully in Nest products today” thanks to a simple firmware upgrade, although I’m not sure if this is the case internally, or on customer’s premises.

The Thread Group is now looking for new members, and companies that are interested in Thread can join the consortium as a Sponsor (with more voting rights), or Contributor member. There’s no individual membership at this stage.

@wzy
Good to learn something. Today I learned the meaning of TIL. 🙂
I discovered them a few weeks ago via an article somewhere about their Wi-Fi ceiling fan. Nearly $1,000 though.