MATRIX Creator is a round-shaped add-on board for Raspberry Pi boards with various sensors, a microphone array, an LED array, a Xilinx FPGA, an Atmel Cortex-M3 MCU, wireless connectivity via Z-Wave, ZigBee, Thread, and NFC, as well as various I/Os…. 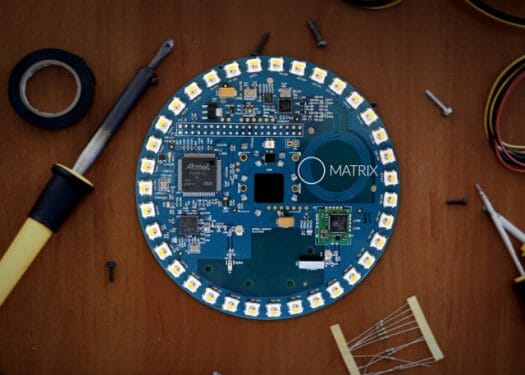 I can’t think of the single application that would make use of all features of this board, but the least we can say is that it’s extremely versatile. The developers are providing MATRIX OS based on Linux to run on the Raspberry Pi board including necessary drivers and some samples, as well as MATRIX CLI and MATRIX CV, to respectively manage multiple Raspberry Pi boards and develop computer vision applications.

Documentation has not been made public yet, but the Wiki is scheduled to be up and running on, or before, July 15th, the date when the board will start shipping. In the meantime, some Raspberry Pi 3 based demos are showcased on their website including including a self-balancing robot, a gesture triggered IR transmitter, a face tracking app, and one demo showing the compass driving LEDs.

The board can be pre-ordered for $99 plus shipping.

Wish hower that they would have sold the nice case from the MATRIX as an option:

Hope that Domoticz and OpenHAB adds support for this as a transceiver regardless.

Home automation control can make use of almost all features of this board.

Think of it like a combination of the Nest Cam, Amazon Echo, and a Zigbee/Z-Wave/Thread home automation gateway.

Hmmm… So unless they somehow manage to get this Z-Wave certified, they can only buy 500 Z-Wave chips, as it’s all you’re allowed without certification, this won’t end up being shipped to a lot of people.

The Silicon Labs ZigBee chip is not very user friendly, but as long as they’ve pre-programmed it, it shouldn’t be a huge deal I guess, however, they can’t claim ZigBee and Thread support, as the chip only supports one standard at a time and to change that, well, it’s most likely more than a firmware flash and that requires a $500 programmer…

Hi TLS, Thank you for the feedback on MATRIX Creator.

Right now we are members of the Z-Wave and ZigBee Alliances and are in the process of certification for both. MATRIX Creator will be shipped with the Silicon Labs Zigbee chip and Sigma Design Z-Wave ready for use. Upgrades will be available trough flashing utilities (GPL licensed) for both Silicon Labs (Zigbee/Thread) and Sigma Design (Z-Wave) chips. No additional programmer (software/hardware) is required for Zigbee/Z-Wave/FPGA/Atmel MCU flashing.

Thank you, the team at MATRIX Labs.

@Yoel
How did you convince Silicon Labs to allow that? They’re notoriously closed source. I’ve worked with them in the past and they don’t seem very open to the idea of any kind of open source solution for their chips.

Sigma Designs are just the same, so I’m really surprised to hear about your claims that you’ll have some kind of utility that allows the user to flash the chips. Also, I take it you’re aware that Z-Wave is region/frequency limited and requires different firmware depending on the frequency used?

Sounds like just a bunch of parts thrown on a board without any thought about what you can do next and how you can do it. Also, there is no LoRa. And in the video they call the FPGA a “Microcontroller”. Well it isn’t (unless they load a uC core on it – which I seriously doubt).

Makes a nice IoT board if you can use it without Raspberry-awful-Pi.