Engineers at Google Research wanted to measure the strength of a carrier signals without having to use a bulky oscilloscope or DAQ (Data Acquisition) system,  so they looked into several makers boards to achieve this task, eventually decided to go with BeagleBone Black / Green, and created their own PRUDAQ cape capable of sampling 40 million samples per second, and open source it all. 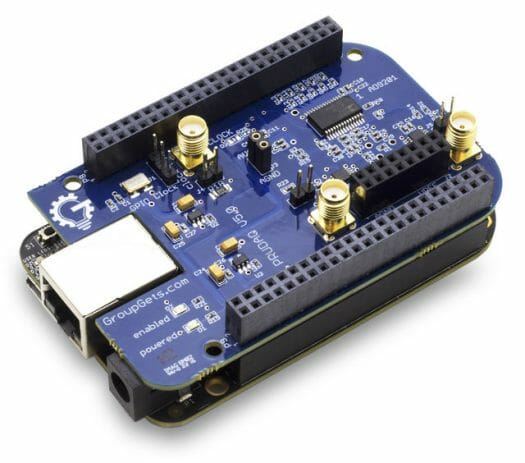 The complete software and hardware documentation can be found on the Wiki and source code and design files in Github. The software is based on BeagleLogic logic analyzer, and you can retrieve and analyze the data on your computer using the command line with a typical output looking like:

The Beaglebone Black already has an ADC input, but PRUDAQ allows for much faster sampling, suitable to capture radio waves for example. Bear in mind that it’s not really suitable to be used as an oscilloscope due to limitations such as 0 to 2V range, and others. Any specific questions about PRUDAQ project can be asked on PRUDAQ users Google Group.

While the add-on board has been designed by Google Research engineers, it is not a Google product, and it’s made by GetLab, and currently sold on GroupSets for $79 for the cape only, or $159 as a bundle with a BeagleBone Black, PRUDAQ cape, an 8GB micro SD card pre-loaded with BeagleLogic image, one 64GB USB 3.0 Thumb Drive, one BNC-M to SMA-M RG-58 Cable, a USB mini cable, and 3 jumpers.

The Raspberry Pi is so popular, that it’s nice to see projects using the BeagleBone Black!

But, regarding alternative to bulky oscilloscopes, what’s wrong with the Red Pitaya or Digilent’s Analog Discovery 2? Both of which are about the same in size as the BBB, but have more bandwidth, high sampling, higher adc resolution than the PRUDAQ.

What kind of “carrier” are they trying to “measure” with a relatively slow 40 Msps ADC? Remember, even a cheap digital oscilloscope rate at 100 MHz (1-channel only) has a 1 Gsps (yes that’s G for Giga, not M for Mega) 8-bit interleaved ADC, and that is pushing it. So going by the same specifications, this 40 Msps ADC cape would do direct sampling to only around 4 MHz, maybe 8 MHz if you add some hardware filtering. (By the way, it looks like there’s little or nothing in the way of a front end on their board – not… Read more »