The Ethernet port is also gone, but most of the other specifications remain the same as seen from the comparison table below.

The board is designed and manufactured by Seeed Studio, and the company send me an early sample for evaluation together with Grove Base Cape for Beaglebone v2.0 that supports up to 12 extra Grove modules. I’ve not had time to review both yet, so I’ll show what I’ve received first. 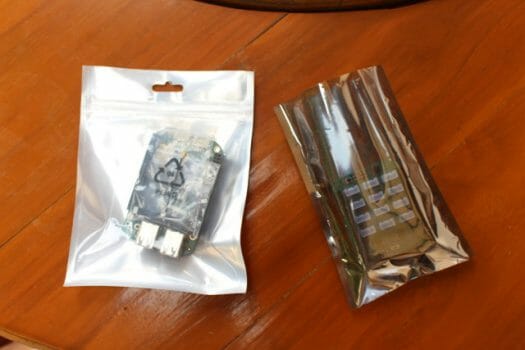 I got two unbranded packages for each board, but I understand BBGW board will be send in a retail package with two WiFi antennas, and a micro USB to USB cable for power.

I got the two antennas, but not the USB cable. There are two u.FL connectors where you can insert the antennas. The wireless module is Texas Instruments WiLink8 (model WG78V0) that supports WiFI 802.11 b/g/n @ 2.4 GHz 2×2 MIMO and Bluetooth 4.1 LE. The four USB ports are on the left, and two Grove connectors (I2C & UART) on the right.

The bottom of the board has the micro SD slot, micro USB port for power, and unpopulated 20-pin JTAG solder pads. The board can run Debian, Android, Ubuntu, Cloud9 IDE on Node, and all other operating systems supported by BeagleBone Black. The wireless module support AP+STA mode, as well as A2DP & MRAA Libraries. The board is shipped with a Debian based firmware, and you can easily access it by accessing http://192.168.8.1 from your computer web browser to get some documentation. Resources for the board can be found on the BeagleBone Green Wireless Wiki.

Grove Base Cape for Beaglebone v2.0 has 4x digital I/O headers, 2x analog input headers, 4x I2C headers, and 2x UART headers, as well as a I/O voltage selector (3.3V or 5V), a Cape address switch, and a user button. More details about the grove base cape can be found in the Wiki.

I plan to write test the board, and the cape with some of the Grove module I got in Wio Link Starter Kit in the next few days.

Continue reading “Getting Started with Beaglebone Green Wireless Development Board“

So if the versions of the beaglebone are green and black, what does it mean that the grove cape supports beagle bone “version 2”?

@ben
“Version 2.0” refers to the cape version. They have “version 1” of the cape @ http://www.seeedstudio.com/depot/Grove-Cape-for-BeagleBone-Series-p-1718.html

would have been perfect if Ethernet remained though. How can we add ethernet connectivity to this board? Would usb to ethernet converters be stable?
If yes, maybe one can design a cape
any thoughts?

@rifat
You can access the user interface through a USB Ethernet gadget driver, but it’s probably not what you’d like to do here. You could always use a USB to Ethernet dongle, or design a CAPE.

@Jean-Luc Aufranc (CNXSoft)
about the cape, can you please suggest alternatives?
I mean since there is no USB connection on the headers, all I can think is to use a short USB cable and connect eth/usb converter IC to the uP. However, I don’t really think that this is different than using USB/ETH dongle :/

I am really wondering why they have dumbed the ethernet in the first place :/
Hopefully an elegant solution can be found for this.

@rifat
If performance is not an issue, you could use SPI Ethernet (ENC28J60) too.
For details about performance: http://www.chip-community.org/index.php/Add_a_enc28j60_Ethernet_interface

oh great! I didn’t know that ENC28J60 can be mapped to eth0 under ifconfig 🙂
This would surely be an elegant way to solve the lack of ethernet for IoT applications.

one last question would be, to your knowledge, does the driver for ENC28J60 work robustly? It would also be bad if we have frequent loss of connections

thanks a lot again 🙂

@rifat
It worked well for me, but I have not used ENC28J60 very much, so I cannot really comment on its stability.