Realtek RTL8710 could eventually become a serious competitor to ESP8266, as it’s based on ARM Cortex M3, provides many of the same features, and sells for roughly the same price. While currently software support is still work in progress and community is very small, I’ve recently written a quick start guide  using AT commands to control RTL8710 connectivity in station and access point mode, and commands are also available for GPIO, OTA firmware updates, servers… This however requires some soldering and a USB to TTL debug board, and is not quite as convenient as ESP8266 board like NodeMCU. Some RTL8710 and RTL8195 development boards are already available but they cost over $25, but I’ve been informed of a cheap no-name RTL8710 board with a micro USB port for programming and power, and well as headers with GPIOs, UARTs, NFC, and power pins, that looks somewhat similar to ESP8266 Witty board. 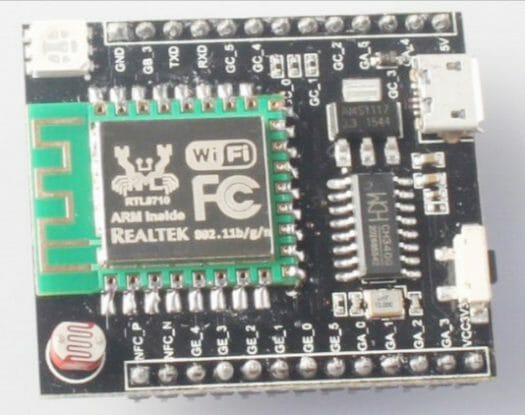 I’ve asked one Aliexpress seller whether it would be breadboard compatible, but they did not manage to answer my question. [Update: After estimating dimensions with pictures, it will most likely not be breadboard friendly] 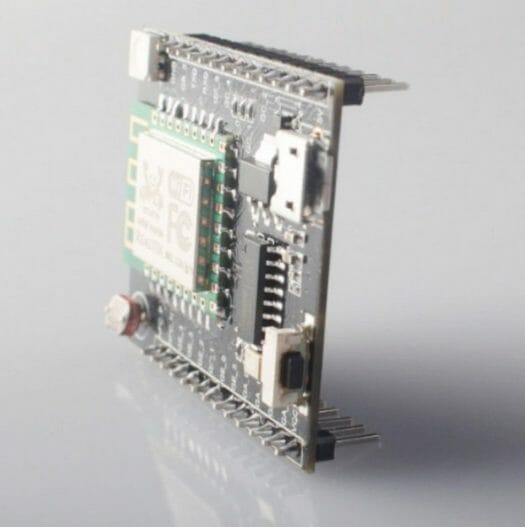 They did try to help however, by first sending some software manual with AT commands, followed by schematics and PCB layout pictures, all of which you can find here.

@TC
Yes, you must be right… I’ve just check the measurement with my RTL8710 module. It’s 1.5cm, and based on measurements on the screen, the board looks double.. So 3 cm. That means it will probably be breadboard-friendly like the first NodeMCU board (v0.9)… It will fit but you can’t connect your own wires…

I wonder if there will easy development tools and SDK available like the ones on ESP8266. Because if we are stuck with AT firmware, it will be a flop.

@Martin
As discussed in http://www.cnx-software.com/2016/08/01/development-resources-for-realtek-ameba-rtl8710-rtl8711-and-rtl8195-wifi-socs/, there’s an SDK, but I have not tested it. It’s been designed for Amena Arduino board, but also works with RTL8710. There may be some issues with licenses though, as part of the code requires Realtek written permission to use it, despite it being made available without NDA.

“[Update: After estimating dimensions with pictures, it will most likely not be breadboard friendly]”

For the SDK, there is a Facebook group for the Ameba board, but they don’t want to officially support the RTL8710 because it does not have “video”.

@Jean-Luc Aufranc (CNXSoft) is there a tool to upload some code to the board?

Updated post with link to ICStation, as it’s sold for $5.99 there.
Edit: They’ve removed the link for some reasons.