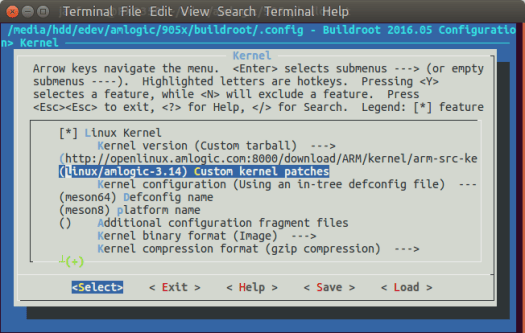 You can check the source code as follows:

If you have the wrong toolchain the code won’t build (See comments section). So I installed several toolchains provided by Amlogic (all may not be needed) in /opt:

I also downloaded a shell script to add the toolchains to my path:

Once toolchains are setup, you can select one of three boards config (Q200 / S912 as example) and start building the code:

Separately, you can also find buildroot for Linux 4.4, but this is very likely very early work, and should be used together with Amlogic Android 7.0 SDK once it is released.

Have they done anything to encourage Android updates for the S802, S805 S812 socs?

Dumping tarball with the code is NOT THE WAY to do it.

The proper way is working with kernel.org community to upstream all the changes. So what is needed is a series of patches send to [email protected] mailing list that add all missing support.

In few months that 3.X or 4.X code dump will be old, with security holes and basically unusable for serious worketc. Upstreaming changes and maintaining these upstream is the only working way.

When will AMLogic devices fully support the stock Kodi without modifications?

Great! So some S905D linux sat-tv-mini-pc will come true, perhaps with android 7 (N)

I just watch online content like Filmon as Kodi buffers video better on my real garbage broadband speed, 1.2 mb is a good day!

So I am curious what are the Kodi problems you refer to?

@Theguyuk
HD audio and auto-switch fps work??? I don’t think.
Without this function kodi is only 40% used.

@Theguyuk
Apart from what Massimo wrote, this also concerns the video decoding.

From what I know, this phenomena plagues most, if not all, Android TV boxes because of what SoC producers like Rockchip, AMLogic, Realtec (and all the rest) do – the way they act. I think that only nVidia is the only outstanding one in this matter.

But there are other people here which could explain this issue much better than me, as my understanding of it is quite limited due to its technicality…

Kodi use mediacodec (omx layer ) ,without it is impossible playback smooth any content.
Without mediacodec support kodi is used at 0%.
Amlogic codec are no more suport from kodi 16.

I thought hardkernel en amlogic where working together to mainline the 905 soc?

@Roel
A lot of effort has been done from crew at http://linux-meson.com/ in bringing Amlogic SoC support to mainline kernel and U-Boot.

at that time they considered either going mainline or using a 4.4 fork
since then, we have no information about their plan
some community members asked them in forum here and there but never get any answer, which i guess can be interpreted as no mainline :p

Stane1983’s news is the best yet. Until they get the video stuff worked out, these boxes make terrific headless servers.

Ron : When will AMLogic devices fully support the stock Kodi without modifications? Well open source allows Kodi project not be the only one to provide a Kodi version, so you can turn to Libreelec to get Kodi for amlogic devices. In fact their latest LE 8 alpha (Kodi Krypton), offers support for various amlogic chips and a bunch of patches already fix various kodi problems on amlogic in a stable LE 7 (kodi 16), like dynamic framerate or HD audio passthrough (s905 only i believe). So while amlogic still offers a very minimal linux support that definitely won’t help… Read more »

@mdel
I think he was thinking about Android support which is correct. amlcodec as part of Kodi is in source for use in linux solutions.

It is a shame all parties can not find common ground to work together, I would guess more Linux support would grow new markets for Amlogic?

People should talk to Amlogic

okay yeah i never really think about android. Well you can always dual boot, and the good thing with those powerful socs, is that they boot very fast. My s905 nexbox A95x (cold) boots android from the emmc in something like 20 seconds and LE from the sdcard in about 25sec. Also it’s not been mentioned here but will the new Wetek Play 2 s905H bring something new to the table, kodi or linux wise ? Although only Android 5.1 is listed on their specs sheet at the moment, i’ve not browsed their forums to see if a linux OS… Read more »

@Jean-Luc Aufranc (CNXSoft)
Which U-Boot you tried to compile and which defconfig?

@Jean-Luc Aufranc (CNXSoft)
That is gxm_q200_v1_defconfig uboot defconfig. Try to build only that. If not working, use toolchains from http://openlinux.amlogic.com:8000/deploy/ (you also need arc-4.8 to build uboot).

Here is my result:

Hi~
I’ve got this error after make
Do you have any advice?

Thanks for these instructions, I followed them and succesfuly built kernel, rootfs and u-boot. However I can’t find instructions to burn the resulting files to a working SD card. Amlogic instructions on their pdf seem to be wrong or incomplete. I have a S912 device. I’ve looked at what libreelec and armbian do and this is what I did: * Enable SD boot with balbes method form armbian * create a bootable SD from libreelec for s905 * Kernel: create a fat partition and copy boot.img from buildroot renamed as kernel.img * DTB copy gxl_p230_2g.dtb from buildroot to fat partition… Read more »

Any news about those topic ? I just bought my h96 pro+ and I am willing to transform it into a headless server.

@gnthibault
If you’re going to use your TV box as a headless server, better use Linux mainline than Amlogic release: http://www.cnx-software.com/2017/03/06/mainline-linux-on-64-bit-arm-amlogic-socs-and-tv-boxes-such-as-wetek-hub-player-2-nexbox-a1-a95x-etc/