From time to time, you see new products on the market with an idea that – in hindsights – seems to simple and obvious that it makes you wonder why you or others had not thought about it a long time ago. Most people will use an Arduino board with a breadboard for their project, so it makes perfect sense to combine both into a single product, and that’s exactly what STEMTera has done, when they designed a breadboard containing an Arduino compatible board, supporting Arduino UNO R3 shields, and usable with LEGO bricks. 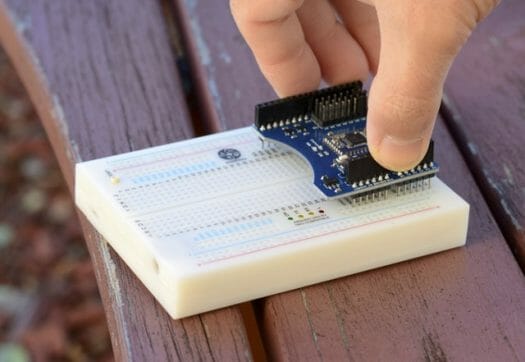 One obvious advantage is that you don’t need so many dupont cables. You can program this smart breadboard like any Arduino UNO board with Atmel Studio, Arduino IDE, AVR-GCC, AVR-GCC with LUFA, Codebender, Scratch, or any other compatible tool. 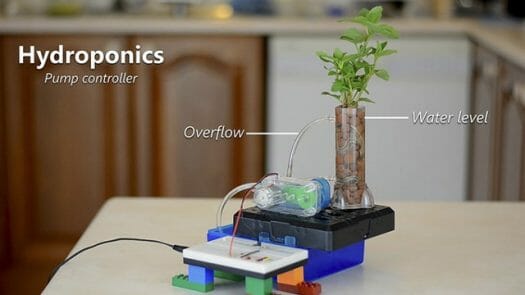 The bottom of the breadboard is LEGO compatible so you can easily assemble a standard for it, or connect it to a robotic kit,  as demonstrated with the pump controller project pictures above.

I really like how the project developers have thought out how to leverage existing products like Arduino shield and LEGO bricks, so you won’t need to spend much, if anything, on extra modules or accessories. They’ve also exposed pin from ATmega16U2 MCU to allow for native USB project development using the LUFA framework.

STEMTera project launched on Kickstarter a few days ago, almost reached its $35,000 funding target, and there are early bird rewards for $39 for various colors, after which STEMTera will require a $42 pledge. Retail price is expected to be $45, and I’m sure clone will show up in a couple of months… Shipping adds $8, and delivery is planned for December 2016 for $42 pledges, March 2017 for $39 pledges, but you can pay $69, if you want a developer edition to be shipped in October 2016.

I could just remember there’s something somewhat similar, but much thicker and using Vortex x86 processor with 86Duino EDUCAKE.