In a concept similar to Arduissimo, Papilio DUO is an Arduino compatible board with a Xilinx Spartan-6 FPGA, but it adds a real Atmel AVR MCU, and instead of going the Indiegogo route, the project has launched on Kickstarter, and already reached its $30,000 funding target with 13 days to go. Instead of writing VHDL code, a drag and drop graphical tool called DesignLab will help you build your own circuits more easily.

But the real selling point of this project is the software. Papilio DesignLab is a modified version of the Arduino IDE running in Windows or Linux that allows you to integrate virtual instruments drawn using Xilinx ISE schematic editor and the Papilio Circuit Library. For example, Papilio DUO can easily become a low cost logic analyzer or a frequency generator just by taking the design from the library which seems pretty extensive according to the table below. 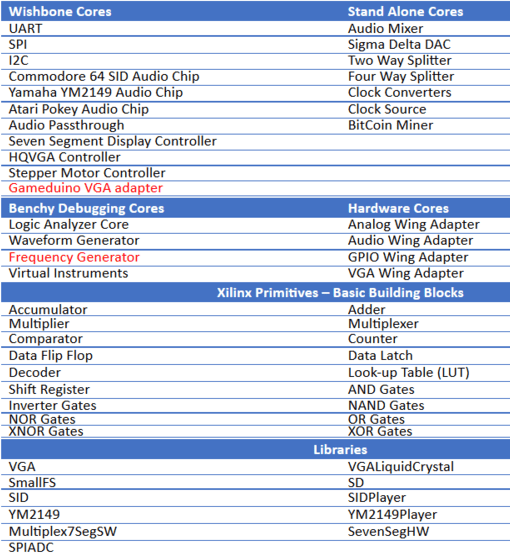 You can pledge $88 to get Papilio DUO with 512 KB RAM, or $125 to get the Deluxe version with 2MB SRAM. Two other perks, expansion boards, are also available as part of the campaign:

Shipping to the US is free, but people with addresses in the rest of the world need to add $10 for shipping.

Since the project is already fully funded, the developer, Jack Gasset, has added some stretch goals including a plastic enclosure ($50k goal), a stepper motor wing ($80k goal), and more.