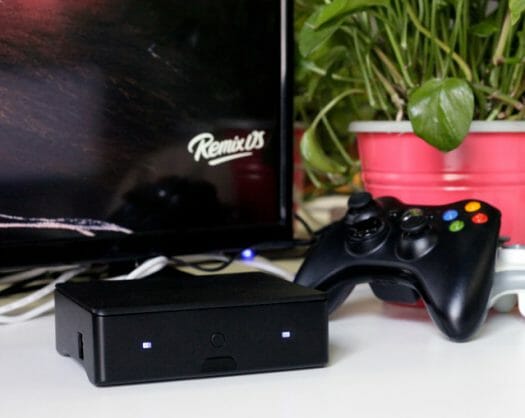 The case design will be the same, but the hardware much more powerful than the Rockchip RK3368 based modek. Remix IO+ specifications:

The system will support for Android and Android TV apps. I’ve found about it through Jide YouTube account in the short teaser video below.

Will this use all CPU cores at the same time or switch between 2 and 4 CPU cores?

They describe DRM 1 & 3 on the specs. Does it mean that this device will be capable to play Netflix and Youtube at 4K?

Sorry, they wrote about my doubt in the FAQ:

“Remix IO can decode and output videos up to 4K. However, for platform (ie. YouTube, Netflix, etc.) specific videos that are in Full HD (1080p) and 4K, we are still in development to work out some issues. We fulfill in March and we’re confident we will be able to work out those issues by the time your Remix IO ships.”

Until may 2017 LOL, there will be many other released before that time frame I suspect. Looks like a great media player though.

If it had a SATA port, I would love one box like this, even if I had to wait until 2017. I am looking for a NAS like device for FTP/Samba/Torrent/NFS. Right now I prefer an oDroid XU4 with 32 GB internal memory. I am not 100% sold on the oDroid, I want a TV box like server running permanently at the lowest cost possible, with as much as possible community support. I want the oDroid mainly because a Raspberry Pi 3 is not powerful enough for this and it does not have Gigabit connectivity.

Jide has decided to stop working on Remis OS for the consumer market, focusing instead on the enterprise market, so they canceled Remix IO/IO+, and will provide full refunds to backers: https://www.kickstarter.com/projects/jidetech/remix-io-a-4k-nougat-powered-all-in-one-device/posts/1939337