The HDMI Forum has just announced they’ve been working on HDMI specification Version 2.1 adding new video resolutions and refresh rates including 8K60 and 4K120, as well as dynamic HDR, and increased bandwidth up to 48 Gbps for uncompressed 8K videos with HDR. 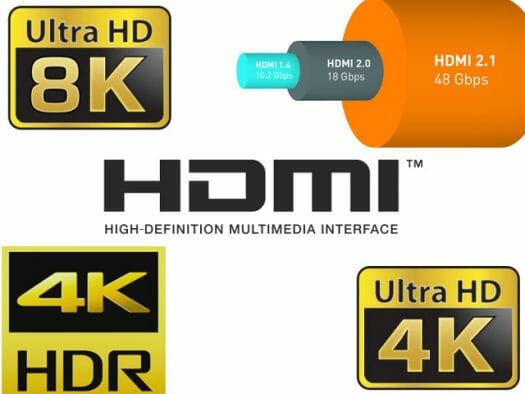 The new specification also includes support for eARC (enhanced audio return channel) with support for advanced audio formats such as object-based audio, and advanced audio signal control capabilities including device auto-detect. Game Mode VRR is another new feature from HDMI 2.1 with variable refresh rate to enable a 3D GPU to display the image at the moment it is rendered in order to reduce lag and frame tearing.

Beside 4K120 and 8K60, the new specification also handles 4K, 5K, 8K, and even 10K resolutions at various frame rates between 50Hz to 120 Hz, up to 10K @ 120 Hz. Higher resolutions and frame rates (>=4K @ 120Hz; >= 8K @ 60 Hz) will require the purchase of new HDMI 2.1 cables, and it’s not marketing scam like for 4K/HDMI 2.0 cables, as the increased bandwidth will indeed require new 48G cables. New cables with be backward compatible with earlier versions of the specification, so if you have a new 48G HDMI cable, it will work with your existing TV, set-top box, receiver, etc…

The new specification will be available to all HDMI 2.0 adopters when it is released early in Q2 2017. You’ll find a bit more info including a FAQ on HDMI 2.1 page.

The next drip feed of tech that won’t have any appreciable use for many years. Which means that later this year, the TV manufacturers will be trying to tell you that your 4K HDR TV is out of date. It’s all becoming quite the con and TV delivery services are just not in a position to keep up with the change in hardware changes. Standard definition is still very prevalent, let alone HD and as for 4k, it has come along at a snails pace. Hopefully people will not be quick to jump onto a largely non existent bandwagon and… Read more »

Non existent? Bro, my gtx titan xps have been waiting for 120hz 4k.

@tango
4K @ 120 Hz is only available using the yet-to-be-released HDMI 2.1 specs, so your card might support 4K @ 120Hz via DisplayPort instead?

HDMI 2.1 specifications have been released to members, and “the HDMI 2.1 Compliance Test Specification (CTS) will be published in stages during Q1-Q3 2018”.