There’s a nice table in Wikipedia that explains the main differences between HDMI 1.4 and HDMI 2.0 and older versions. 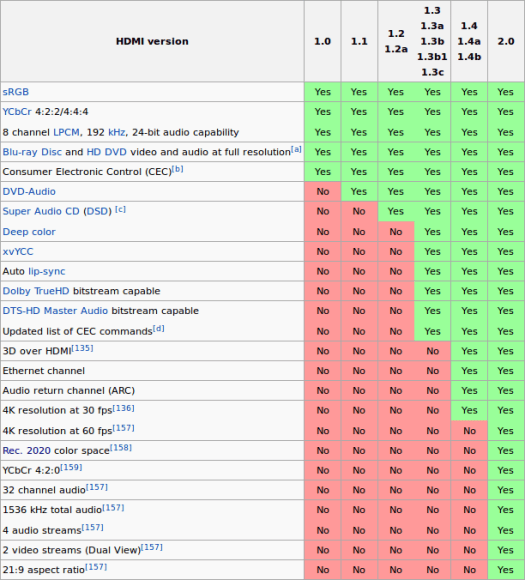 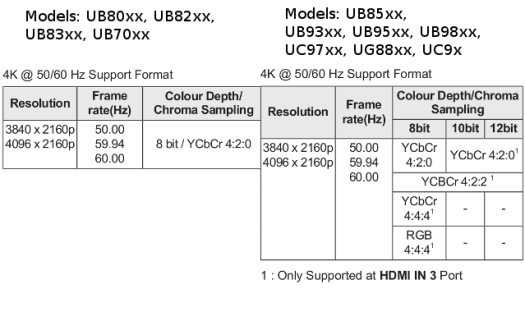 I’ve just found that Rockchip RK3288 processor allegedly does not support YCbCr 4:2:0, and only TVs with 10-bit color depth and YCbCr 4:4:4 or RGB 4:4:4 are supported. Extract from Open Hour Chameleon FAQ:

There you go… An HDMI 2.0 capable media player may not be compatible with a HDMI 2.0 capable TV. I have no idea whether this is only an issue with Rockchip RK3288, or if this problem is likely to occur with other platforms, despite YCbCr 4:2:0 being listed as a feature of HDMI 2.0.

Well, somehow the wiki table is wrong/misleading. All media on TV/bluray is compliant to Rec.709 standard and YCbCr 4:2:0 chroma. Some camcorders uses better chroma subsampling. A good read at http://www.avsforum.com/forum/166-lcd-flat-panel-displays/1381724-official-4-4-4-chroma-subsampling-thread.html A better explain of the HDMI 2.0 improvements, including chroma: http://hiddenwires.co.uk/2014/the-hd4k-column-an-introduction-to-hdmi-2-0/ So HDMI 1.4 has YCbCr 4:2:0 chroma (at least in 1080p) but it’s uses more bits for coding than it should be. My opinion is that current mediaplayer AND 4k TVs’ should handle videos from current 4k camcorders (without convertion). In the near future (when specifications for 4k bluray will be final) 4k mediaplayers and 4k TVs will… Read more »

@mike
On the second link:
“So how is it possible to double the frame rate without doubling the bandwidth? The answer lies in the ’8-bit 4:2:0′ reference; save on colour data, give back in frame rate. ”

Oh well, the RK chip was the one with fake 4k anyway, AFAIK.

It seems it’s a bit early for popper 4K support but I guess in about a year’s time all will be settled. By that time prices should go down too. It’s nice to be an early adopter but sometimes you run into a lot of trouble because of it.

@Jean-Luc Aufranc (CNXSoft) Well, Nvidia allows in drivers 4k60p 4:2:0 over HDMI 1.4 https://forums.geforce.com/default/topic/784374/geforce-drivers/4k-60-hz-hdmi-1-4-4-2-0/ A good read at Anadtech http://www.anandtech.com/show/8191/nvidia-kepler-cards-get-hdmi-4k60hz-support-kind-of Back to topic, it will be a much bigger problem for 4kTV to properly display movies at real 4k resolution than mediaplayers; today sample-and-hold LCDs usually displays motion resolution at 400lines (measured by reviewers and me with FPD Benchmark); interpolation (worse) or backlight scanning/BFI allows for more than 800 lines but proper implementations are only on more expensive TVs. At last, why on earth buy a 4kTV for movies that has lower motion resolution than a better FHD at the… Read more »

Excellent write up and content, sad to see rk3288 not a true 4k device. But then again it was in development for quite along time.

@anon RK3288 would work @ 60Hz with my TV, but with some other TVs yes. I’ve been told there are many 4K TV only supporting 8-bit YCbCr only, so it remains an issue. Now that I have my own 4K TV, and don’t rely on other people to help, I could test a bit more, and a mistake was made when testing 4K last time (using MX player with software decode was the issue), and I can play 4K videos rendered at real 4K with Open Hour Chameleon. I’ll explain this in details in a separate post later today. @mike… Read more »

@mike The TV is reported to have a “900 hz Motion Clarity Index”. You list motion resolution in lines, so it might be a different metric… It’s something I’d have to study… A review for LG850 is here: http://www.hdtvtest.co.uk/news/49ub850v-201406033786.htm Hdtvtest uses motion chart resolution from a special bluray. A good forum and a downloadable test is here: http://www.avsforum.com/forum/139-display-calibration/1014030-fpd-benchmark-software-professional-information.html The second test is more easy to understand. Any LCD/OLED has more or less motion-blur due to sample-and-hold technology. A good read for motion blur with scientific approach here: http://www.blurbusters.com/faq/oled-motion-blur/ Today I didn’t found any public 4k motion resolution charts, maybe someone… Read more »