J-core J2 is an open source processor and SoC design implemented in VHDL, and using  SH2 instruction set found in some Renesas (previously Hitachi) micro-controllers. The code available royalty free under a BSD license, and it’s also patent-free since all SH2 related patents expired expired in October 2014. The developers used to run the code on Xilinx Spartan 6 based Numato Mimas v2 board since it was cheap ($50) and mostly did the job. “Mostly”, because it still lacked Ethernet, capability for SMP and the serial port was slow, so they decided to design their own Turtle Board to address those issues. 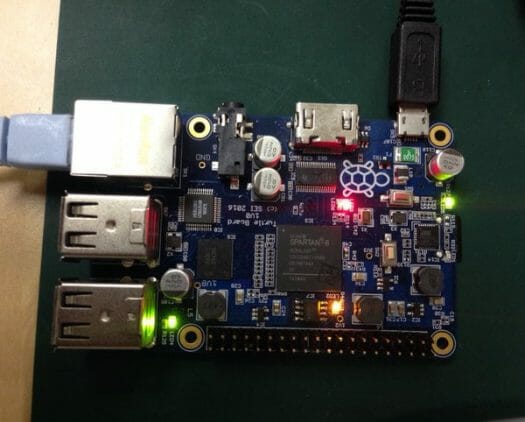 There are very few details about the board, and J-Core Project’s twitter account has not been very active recently. However, they showcased Turtle Board at ELC 2017 last month, so the project is still very alive.

Based on the slide above, the board will start shipping in May 2017, and I could not find a link to pre-order them. They have a dedicated (currently parked) domain @ turtleplatform.com, so it could eventually be announced there, or via a Kickstarter campaign. Patents for newer SH3 and SH4 cores have recently expired too, and J-Core Roadmap includes plans for  J3 (SH3+MMU+FPU) in 2017 and J4 (SH4 64bit – Used in SEGA Dreamcast) in 2018.  If you want to know more about J-Core implementation, you may want to check out ELC 2016 presentation, and/or subscribe to J-Core mailing list.

Thanks to Leon for the ELC 2017 picture.

Hope they get more interest than the kickstarter, Spartixed FPGA Board.

I am reader of their mailing list. very qualified people there. And If I am not mistaken, some Japanese original engineers of the SH family CPUs are about to join the efforts they are making. I really hope they clear the last hurdles and can start working with them. I wish them the best luck.

It’s an interesting prospect. You now have TWO Open Hardware architecture CPUs in the J-series cores and with RISC-V (You have the option of the Rocket core defined in Chisel and Clash-RiscV in Haskell/Clash.)- and they’re credible. Unfortunately, though, the J-series SHx cores are lagging a little bit. They originally expected to have had the first real cuts of an SH4 equivalent by now with the patents expiring all in early 2016. We’re now looking at late-2017/mid-2018 earliest for the really interesting implementations. The SH2’s interesting for an FPGA softcore or for something like an Arduino, but the SH4’s the… Read more »

If they have it available for a credible price they might. Only problem is that they’re implementing it with an FPGA that’s using toolchains only on life support for the benefit of the largest customers still using the Spartan6 and Virtex5 lineup. Even if you’re not using the HLS stuff in Vivado, you really need to be using their latest and that’s honestly not much more pricey on the similar “low-end” stuff as the Spartan6 stuff we’re seeing.

When I looked at the Risc-V SoC on crowdfuning site a few week back they had only 10 percent funding, and I think 13 days left.

Also seems the Chameleon96 from Arrow with Intel Cyclone V ARM/FPGA SoC, and offers WiFi, BT, and quantum-resistant security is due, according to linuxgizmos.

Interesting times ahead, or just to experimental, who knows?

FYI, for those interested in FPGA dev boards, the basic snickerdoodles are back up for order.

What happened to the Turtle Board? Did the entire project die due to some unforseen legal obstacles or what? Any clue?