We’ve just reported about the preview release of Google Assistant SDK that works on the Raspberry Pi 3, and other boards with a microphone, speakers, and access to Internet. The Raspberry Pi foundation and Google have now made it even easier, as they launched AIY Projects Voice Kit with a Google Voice HAT, a speaker, a stereo microphone Voice HAT board, a button, a few cables, and a cardboard case. 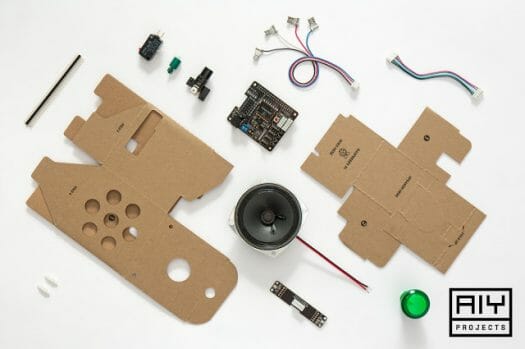 You’ll just need to add your own Raspberry Pi 3, follow the instructions to assemble kits, load and setup the software. Once this is all done, you’ll be able to press the top button, asking anything you want to Google Voice, including the weather.

Price? Sort of free, as it comes with MagPi 57 magazine, where you’ll also find detailed instructions for the kit. Google AIY Projects got its name from a mix between (DIY) and artificial intelligence (AI), and considering it’s “Projects” and not just “Project”, we can expect more kits in the future.

The „nearly-zero-cost“-kit will also work for Pi2, Pi0 and Pi0w (there are now nearly 250000 zeros in the field) Btw. You don’t need a google cloud account

> asking anything you want to Google Voice, including the weather.

Dude, when I read “anything” part, the weather was the last thing I thought about :D.

MagPi issue 57 is sold out everywhere.

Where can we buy just this kit?

I went in Friday morning but Barnes and Noble didn’t stock it yet. I put my name in at customer service and they held one for me when they stocked it Saturday afternoon. They had a couple behind the checkout. Americans may want to use the customer service desk to get it.

Why do I need this “Kit”? Why can’t I just hook up my own powered speaker, microphone (probably USB), and a button (to a GPIO pin)? After all, downloading the magazine is free. The paper edition of MagPi isn’t even sold in my country.

@Drone
Of course you can do it with USB devices

@mrsamuelfraser
The point is … the kit uses the 40 Pin-connector. So (without serious modification) nearly any current pi will work. (Pi3B and the upcoming Pi3A, Pi2B and Pi2A, pi0 and pi0W needs some soldering)

@Harley
No problem. Here http://magpi.cc/AIYMailingList you will find a link to a form to request email notification from Google when the “AIY Projects Voice Kit” (originally packaged with MagPi issue #57) is available for purchase online.

Also you can install mycroftAI on these!! and its open source so you don’t have to give over all your google account data to use it :-). and it is listening all the time after install! https://docs.mycroft.ai/﻿